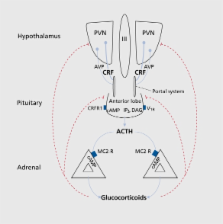 Animals respond to stress by activating a wide array of behavioral and physiological responses that are collectively referred to as the stress response. Corticotropin-releasing factor (CRF) plays a central role in the stress response by regulating the hypothalamic-pituitary-adrenal (HPA) axis. In response to stress, CRF initiates a cascade of events that culminate in the release of glucocorticoids from the adrenal cortex. As a result of the great number of physiological and behavioral effects exerted by glucocorticoids, several mechanisms have evolved to control HPA axis activation and integrate the stress response. Glucocorticoid feedback inhibition plays a prominent role in regulating the magnitude and duration of glucocorticoid release. In addition to glucocorticoid feedback, the HPA axis is regulated at the level of the hypothalamus by a diverse group of afferent projections from limbic, mid-brain, and brain stem nuclei. The stress response is also mediated in part by brain stem noradrenergic neurons, sympathetic andrenornedullary circuits, and parasympathetic systems. In summary, the aim of this review is to discuss the role of the HPA axis in the integration of adaptive responses to stress. We also identify and briefly describe the major neuronal and endocrine systems that contribute to the regulation of the HPA axis and the maintenance of homeostasis in the face of aversive stimuli.

Stress and the individual. Mechanisms leading to disease.

E STELLAR,  B McEwen (1993)
This article presents a new formulation of the relationship between stress and the processes leading to disease. It emphasizes the hidden cost of chronic stress to the body over long time periods, which act as a predisposing factor for the effects of acute, stressful life events. It also presents a model showing how individual differences in the susceptibility to stress are tied to individual behavioral responses to environmental challenges that are coupled to physiologic and pathophysiologic responses. Published original articles from human and animal studies and selected reviews. Literature was surveyed using MEDLINE. Independent extraction and cross-referencing by us. Stress is frequently seen as a significant contributor to disease, and clinical evidence is mounting for specific effects of stress on immune and cardiovascular systems. Yet, until recently, aspects of stress that precipitate disease have been obscure. The concept of homeostasis has failed to help us understand the hidden toll of chronic stress on the body. Rather than maintaining constancy, the physiologic systems within the body fluctuate to meet demands from external forces, a state termed allostasis. In this article, we extend the concept of allostasis over the dimension of time and we define allostatic load as the cost of chronic exposure to fluctuating or heightened neural or neuroendocrine response resulting from repeated or chronic environmental challenge that an individual reacts to as being particularly stressful. This new formulation emphasizes the cascading relationships, beginning early in life, between environmental factors and genetic predispositions that lead to large individual differences in susceptibility to stress and, in some cases, to disease. There are now empirical studies based on this formulation, as well as new insights into mechanisms involving specific changes in neural, neuroendocrine, and immune systems. The practical implications of this formulation for clinical practice and further research are discussed.

David E A Kloet,  Helga E. de Vries,  G Reul (1985)
Two receptor systems for corticosterone (CORT) can be distinguished in rat brain: mineralocorticoid-like or CORT receptors (CR) and glucocorticoid receptors (GR). The microdistribution and extent of occupation of each receptor population by CORT were studied. The CR system is restricted predominantly to the lateral septum and hippocampus. Within the hippocampus, the highest density occurs in the subiculum +/- CA1 cell field (144 fmol/mg protein) and the dentate gyrus (104 fmol/mg protein). Affinity of CR for CORT was very high (Kd, approximately 0.5 nM). The GR system has a more widespread distribution in the brain. The highest density for GR is in the lateral septum (195 fmol/mg protein), the dentate gyrus (133 fmol/mg protein), the nucleus tractus solitarii and central amygdala. Substantial amounts of GR are present in the paraventricular nucleus and locus coeruleus and low amounts in the raphe area and the subiculum + CA1 cell field. The affinity of GR for CORT (Kd, approximately 2.5-5 nM) was 6- to 10-fold lower than that of CR. Occupation of CR by endogenous ligand was 89.5% during morning trough levels of pituitary-adrenal activity (plasma CORT, 1.4 micrograms/100 ml). Similar levels of occupation (88.7% and 97.6%) were observed at the diurnal peak (plasma CORT, 27 micrograms/100 ml) and after 1 h of restraint stress (plasma CORT, 25 micrograms/100 ml), respectively. Furthermore, a dose of 1 microgram CORT/100 g BW, sc, resulted in 80% CORT receptor occupation, whereas GR were not occupied. For 50% occupation of GR, doses needed to be increased to 50-100 micrograms/100 g BW, and for 95% occupation, a dose of 1 mg CORT was required. The plasma CORT level at the time of half-maximal GR occupation was about 25 micrograms/100 ml, which is in the range of levels attained after stress or during the diurnal peak of pituitary-adrenal activity. Thus, CR are extensively filled (greater than 90%) with endogenous CORT under most circumstances, while GR become occupied concurrent with increasing plasma CORT concentrations due to stress or diurnal rhythm. We conclude that CORT action via CR may be involved in a tonic (permissive) influence on brain function with the septohippocampal complex as a primary target. In view of the almost complete occupation of CR by endogenous hormones, the regulation of the CORT signal via CR will, most likely, be by alterations in the number of such receptors. In contrast, CORT action via GR is involved in its feedback action on stress-activated brain mechanisms, and GR occur widely in the brain.(ABSTRACT TRUNCATED AT 400 WORDS)

Endocrinology of the stress response.

Evangelia Charmandari,  Constantine Tsigos,  George Panagiotis Chrousos (2005)
The stress response is subserved by the stress system, which is located both in the central nervous system and the periphery. The principal effectors of the stress system include corticotropin-releasing hormone (CRH); arginine vasopressin; the proopiomelanocortin-derived peptides alpha-melanocyte-stimulating hormone and beta-endorphin, the glucocorticoids; and the catecholamines norepinephrine and epinephrine. Appropriate responsiveness of the stress system to stressors is a crucial prerequisite for a sense of well-being, adequate performance of tasks, and positive social interactions. By contrast, inappropriate responsiveness of the stress system may impair growth and development and may account for a number of endocrine, metabolic, autoimmune, and psychiatric disorders. The development and severity of these conditions primarily depend on the genetic vulnerability of the individual, the exposure to adverse environmental factors, and the timing of the stressful events, given that prenatal life, infancy, childhood, and adolescence are critical periods characterized by increased vulnerability to stressors.