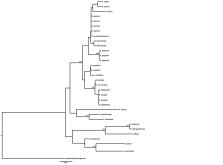 The genus Scutellaria comprises eight species distributed from 50 to 2000 m in Taiwan. Amongst them, S. barbata and S. taipeiensis are very similar on the basis of morphological and plastid DNA sequence information. Therefore, a comprehensive study of the taxonomic status of S. taipeiensis is necessary. We reviewed the herbarium sheets, related literature and protologues and compared morphologies of these two species, as well as their phylogenetic relationships. All evidence, including the diagnostic characters between S. taipeiensis and S. barbata , suggest that they belonged to a single species rather than two. As a result, S. taipeiensis is treated as a synonym of S. barbata .

An updated phylogeny and classification of Lamiaceae subfamily Lamioideae

Yu-Chung Chiang,  Bing-Hong Huang,  Pei-Chun Liao (2012)
The ragged topography created by orogenesis generates diversified habitats for plants in Taiwan. In addition to colonization from nearby mainland China, high species diversity and endemism of plants is also present in Taiwan. Five of the seven Scutellaria species (Lamiaceae) in Taiwan, for example, are endemic to the island. Hypotheses of multiple sources or in situ radiation have arisen to explain the high endemism of Taiwanese species. In this study, phylogenetic analyses using both nuclear and chloroplast markers revealed the multiple sources of Taiwanese Scutellaria species and confirmed the rapid and recent speciation of endemic species, especially those of the “indica group” composed of S. indica, S. austrotaiwanensis, S. tashiroi, and S. playfairii. The common ancestors of the indica group colonized first in northern Taiwan and dispersed regionally southward and eastward. Climate changes during glacial/interglacial cycles led to gradual colonization and variance events in the ancestors of these species, resulting in the present distribution and genetic differentiation of extant populations. Population decline was also detected in S. indica, which might reflect a bottleneck effect from the glacials. In contrast, the recently speciated endemic members of the indica group have not had enough time to accumulate much genetic variation and are thus genetically insensitive to demographic fluctuations, but the extant lineages were spatially expanded in the coalescent process. This study integrated phylogenetic and population genetic analyses to illustrate the evolutionary history of Taiwanese Scutellaria of high endemism and may be indicative of the diversification mechanism of plants on continental islands.