Diagnostic pitfalls of hyperprolactinemia: the importance of sequential pituitary imaging 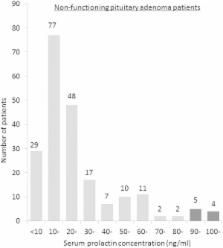 Receiver operating characteristic (ROC) curve analysis was performed, indicating that cut-off value of serum prolactin concentration to distinguish between non-functioning pituitary adenoma and prolactinoma was 38.6 ng/ml. Although it was statistically good accuracy (the area under the curve; 0.96, sensitivity; 0.99 and specificity; 0.81), the result did not fit the clinical situation as many false-positive cases (40 of 212, 18.9%) were included. Among them, mild hyperprolactinemia were shown in 9 (4.2%) and 53 (55.8%) non-functioning pituitary adenoma and prolactinoma, respectively. Four of 9 border zone patients with non-functioning pituitary adenoma were initially treated with dopamine agonists. Sequential head magnetic resonance imaging revealed no tumor shrinkage in all of them despite serum prolactin concentration was decreased. Surgery was chosen for them 24.6 months in average after the introduction of medication.

Non-negligible number of patients with non-functioning pituitary adenoma presented unexpectedly high concentration of prolactin, fraught with a potential risk of misdiagnosis. While this equivocal population is not the majority, the prolactin cut-off value is not safely applicable. Especially for the patients with border zone prolactin concentration, meticulous follow up with sequential pituitary imaging is important.

Pathology and Genetics of Tumour of Endocrine Organs

Andrea Giustina,  Felipe Casanueva,  Tatiana Mancini (2008)
Any process interfering with dopamine synthesis, its transport to the pituitary gland, or its action at the level of lactotroph dopamine receptors can cause hyperprolactinemia. As described in this article, considering the complexity of prolactin regulation, many factors could cause hyperprolactinemia, and hyperprolactinemia can have clinical effects not only on the reproductive axis. Once any drug effects are excluded, prolactinomas are the most common cause of hyperprolactinemia. The most frequent symptom is hypogonadism in both genders. Medical and surgical therapies generally have excellent results, and most prolactinomas are well controlled or even cured in some cases.

Do the limits of serum prolactin in disconnection hyperprolactinaemia need re-definition? A study of 226 patients with histologically verified non-functioning pituitary macroadenoma.

Niki Karavitaki,  Gaya Thanabalasingham,  Niki Meston … (2006)
The differentiation of a pituitary non-functioning macroadenoma from a macroprolactinoma is important for planning appropriate therapy. Serum PRL levels have been suggested as a useful diagnostic indicator. However, values between 2500 and 8000 mU/l are a grey area and are currently associated with diagnostic uncertainty. We wished therefore, to investigate the serum PRL values in a large series of patients presenting with apparently non-functioning pituitary macroadenomas. All patients presenting to the Department of Endocrinology in Oxford with clinically non-functioning pituitary macroadenomas (later histologically verified) between 1990 and 2005 were studied. Information documented in the notes on the medications and on the presence of conditions capable of affecting the serum PRL levels at the time of blood sampling was also collected. Two hundred and twenty-six patients were identified (median age at diagnosis 55 years, range 18-88 years; 146 males/80 females; 143 gonadotroph, 46 null cell, 25 plurihormonal and 12 silent ACTH adenomas). All tumours had suprasellar extension. At the time of blood sampling 41 subjects were taking medications capable of increasing serum PRL. Hyperprolactinaemia was found in 38.5% (87/226) of the patients. The median serum PRL values in the total group were 386 mU/l (range 16-3257) (males: median 299 mU/l, range 16-1560; females: median 572 mU/l, range 20-3257) and in those not taking drugs capable of increasing serum PRL 363 mU/l (range 16-2565) (males: median 299 mU/l, range 16-1560; females: median 572 mU/l, range 20-2565). Serum PRL 2000 mU/l, two were taking oestrogen preparations. Based on a large series of histologically confirmed cases, serum PRL > 2000 mU/l is almost never encountered in nonfunctioning pituitary macroadenomas. Values above this limit in the presence of a macroadenoma should not be surrounded by diagnostic uncertainty (after acromegaly or Cushing's disease have been excluded); a prolactinoma is the most likely diagnosis and a dopamine agonist should be considered as the treatment of choice.