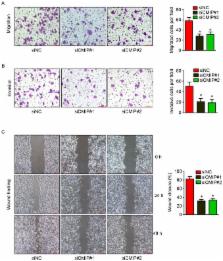 Gastric cancer is one of the most common cancers and the second leading cause of cancer-associated mortality worldwide. Recurrence, metastasis and resistance to drug treatment are the main barrier to survival of patients with advanced stage gastric cancer. Further study of the molecular mechanisms involved will improve the therapeutic options for gastric cancer. In a previous study, c-Maf was discovered as an oncogene transduced in the avian AS42 retrovirus, and was found to be overexpressed in multiple myeloma and angioimmunoblastic T-cell lymphoma. c-Maf inducing protein (CMIP) is involved in the c-Maf signaling pathway, which was reported to serve an important role in human minimal change nephrotic syndrome and in human reading and language related behavior. However, the relationship between CMIP and human gastric cancer has not yet been reported. In the present study, CMIP protein levels in gastric cancer tissues and cells were measured using immunohistochemistry and western blot analysis; the expression of CMIP protein was significantly higher in gastric cancer tissues compared with normal gastric tissues. Expression was positively associated with poorer clinical parameters, relapse-free survival and overall survival. Furthermore, using cell counting, Cell Counting Kit-8, colony formation, wound healing and Transwell assays, together with flow cytometry, CMIP depletion by RNA interference was observed to reduce the capacity of gastric cancer cells to proliferate and migrate in vitro. Furthermore, the upstream and downstream genes of CMIP were analyzed by luciferase reporter assay and reverse transcription quantitative polymerase chain reaction, which indicated that CMIP was a direct target of miR-101-3p. In addition, CMIP knockdown was observed to result in the downregulation of MDM2 and mitogen activated protein kinase (MAPK) expression at the mRNA level. In conclusion, CMIP demonstrated an oncogenic role in human gastric cancer cells. Furthermore, microRNA-101-3p, MDM2 and MAPK were involved in the CMIP signaling pathway in gastric cancer. CMIP could be a novel target for further investigation in the clinical therapeutic management of gastric cancer.

Dianne F. Newbury,  Laura Winchester,  Laura Addis … (2009)
Specific language impairment (SLI) is a common developmental disorder characterized by difficulties in language acquisition despite otherwise normal development and in the absence of any obvious explanatory factors. We performed a high-density screen of SLI1, a region of chromosome 16q that shows highly significant and consistent linkage to nonword repetition, a measure of phonological short-term memory that is commonly impaired in SLI. Using two independent language-impaired samples, one family-based (211 families) and another selected from a population cohort on the basis of extreme language measures (490 cases), we detected association to two genes in the SLI1 region: that encoding c-maf-inducing protein (CMIP, minP = 5.5 × 10−7 at rs6564903) and that encoding calcium-transporting ATPase, type2C, member2 (ATP2C2, minP = 2.0 × 10−5 at rs11860694). Regression modeling indicated that each of these loci exerts an independent effect upon nonword repetition ability. Despite the consistent findings in language-impaired samples, investigation in a large unselected cohort (n = 3612) did not detect association. We therefore propose that variants in CMIP and ATP2C2 act to modulate phonological short-term memory primarily in the context of language impairment. As such, this investigation supports the hypothesis that some causes of language impairment are distinct from factors that influence normal language variation. This work therefore implicates CMIP and ATP2C2 in the etiology of SLI and provides molecular evidence for the importance of phonological short-term memory in language acquisition.

Overexpression of c-maf is a frequent oncogenic event in multiple myeloma that promotes proliferation and pathological interactions with bone marrow stroma.