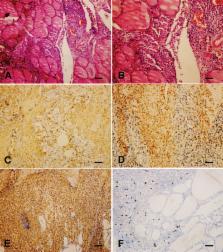 The patient was treated with CHOP-L combination chemotherapy followed by local radiotherapy, and tolerated the modality well. The patient has been in remission for 28 months so far.

To our knowledge, this is the first case report of primary extranasal NKTCL exclusively arising in the thyroid. The case has a relatively good treatment outcome with timely diagnosis and multimodality approach.

Clinical differences between nasal and extranasal natural killer/T-cell lymphoma: a study of 136 cases from the International Peripheral T-Cell Lymphoma Project.

Wing Au,  ,  Shigeo Nakamura … (2009)
Among 1153 new adult cases of peripheral/T-cell lymphoma from 1990-2002 at 22 centers in 13 countries, 136 cases (11.8%) of extranodal natural killer (NK)/T-cell lymphoma were identified (nasal 68%, extranasal 26%, aggressive/unclassifiable 6%). The disease frequency was higher in Asian than in Western countries and in Continental Asia than in Japan. There were no differences in age, sex, ethnicity, or immunophenotypic profile between the nasal and extranasal cases, but the latter had more adverse clinical features. The median overall survival (OS) was better in nasal compared with the extranasal cases in early- (2.96 vs 0.36 years, P < .001) and late-stage disease (0.8 vs 0.28 years, P = .031). The addition of radiotherapy for early-stage nasal cases yielded survival benefit (P = .045). Among nasal cases, both the International Prognostic Index (P = .006) and Korean NK/T-cell Prognostic Index (P < .001) were prognostic. In addition, Ki67 proliferation greater than 50%, transformed tumor cells greater than 40%, elevated C-reactive protein level (CRP), anemia (< 11 g/dL) and thrombocytopenia (< 150 x 10(9)/L) predicts poorer OS for nasal disease. No histologic or clinical feature was predictive in extranasal disease. We conclude that the clinical features and treatment response of extranasal NK/T-cell lymphoma are different from of those of nasal lymphoma. However, the underlying features responsible for these differences remain to be defined.

How I treat NK/T-cell lymphomas.

Malignant lymphoma of the thyroid gland: a clinicopathologic study of 108 cases.

C Heffess,  R A Frommelt,  Fabiano Thompson … (2000)
We report a retrospective clinicopathologic study of 108 primary thyroid gland lymphomas (PTLs), classified using the REAL and proposed WHO classification schemes. The patients included 79 women and 29 men, with an average age of 64.3 years. All patients presented with a thyroid mass. The PTLs were classified as marginal zone B-cell lymphoma of mucosa-associated lymphoid tissue (MALT) or MZBL (n = 30), diffuse large B-cell lymphoma (DLBCL) with MZBL (n = 36), DLBCL without MZBL (n = 41), and follicle center lymphoma (FCL; n = 1). Excluding the FCL, features of lymphomas of MALT-type were identified in all groups, despite a follicular architecture in 23% of cases. Lymphocytic thyroiditis (LT) was identified in 94%. Ninety-one percent of patients presented with stage IE or IIE disease, whereas 69% had perithyroidal soft tissue infiltration. All patients were treated with surgical excision followed by adjuvant therapy (76%): chemotherapy (15%), radiation (19%), or a combination of radiation and chemotherapy (42%). Disease-specific survival was 82% at last follow up (mean, 82.8 mos) and 79% at 5 years. Statistically, stages greater than IE, presence of DLBCL, rapid clinical growth, abundant apoptosis, presence of vascular invasion, high mitotic rate, and infiltration of the perithyroidal soft tissue were significantly associated with death with disease. No patients with MZBL or stage IE disease died with disease. In summary, PTLs typically occur in middle- to older-aged individuals as a thyroid mass, with a predilection for females. Despite their histologic heterogeneity and frequent simulation of other lymphoma subtypes, virtually all PTLs are lymphomas of MALT-type arising in the setting of LT. Mixed DLBCL and MZBL are common. Overall, PTLs have a favorable outcome with appropriate therapy, but prognosis depends on both clinical stage and histology. MZBL and stage IE tumors have an excellent prognosis, whereas tumors with a large cell component or DLBCL or stage greater than IE have the greatest potential for a poor outcome.