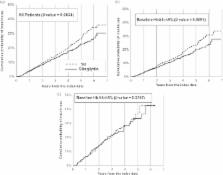 To assess time to insulin initiation among patients with type 2 diabetes mellitus ( T2DM) treated with sitagliptin versus sulphonylurea as add‐on to metformin.

This retrospective cohort study used GE Centricity electronic medical records and included patients aged ≥18 years with continuous medical records and an initial prescription of sitagliptin or sulphonylurea (index date) with metformin for ≥90 days during 2006–2013. Sitagliptin and sulphonylurea users were matched 1 : 1 using propensity score matching, and differences in insulin initiation were assessed using Kaplan– Meier curves and Cox regression. We used conditional logistic regression to examine the likelihood of insulin use 1–6 years after the index date for each year.

In this real‐world matched cohort study, patients with T2DM treated with sitagliptin had a significantly lower risk of insulin initiation compared with patients treated with sulphonylurea, both as add‐on to metformin.

Ralph D'Agostino (1998)
In observational studies, investigators have no control over the treatment assignment. The treated and non-treated (that is, control) groups may have large differences on their observed covariates, and these differences can lead to biased estimates of treatment effects. Even traditional covariance analysis adjustments may be inadequate to eliminate this bias. The propensity score, defined as the conditional probability of being treated given the covariates, can be used to balance the covariates in the two groups, and therefore reduce this bias. In order to estimate the propensity score, one must model the distribution of the treatment indicator variable given the observed covariates. Once estimated the propensity score can be used to reduce bias through matching, stratification (subclassification), regression adjustment, or some combination of all three. In this tutorial we discuss the uses of propensity score methods for bias reduction, give references to the literature and illustrate the uses through applied examples.

(2013)
OBJECTIVE This study updates previous estimates of the economic burden of diagnosed diabetes and quantifies the increased health resource use and lost productivity associated with diabetes in 2012. RESEARCH DESIGN AND METHODS The study uses a prevalence-based approach that combines the demographics of the U.S. population in 2012 with diabetes prevalence, epidemiological data, health care cost, and economic data into a Cost of Diabetes Model. Health resource use and associated medical costs are analyzed by age, sex, race/ethnicity, insurance coverage, medical condition, and health service category. Data sources include national surveys, Medicare standard analytical files, and one of the largest claims databases for the commercially insured population in the U.S. RESULTS The total estimated cost of diagnosed diabetes in 2012 is $245 billion, including $176 billion in direct medical costs and $69 billion in reduced productivity. The largest components of medical expenditures are hospital inpatient care (43% of the total medical cost), prescription medications to treat the complications of diabetes (18%), antidiabetic agents and diabetes supplies (12%), physician office visits (9%), and nursing/residential facility stays (8%). People with diagnosed diabetes incur average medical expenditures of about $13,700 per year, of which about $7,900 is attributed to diabetes. People with diagnosed diabetes, on average, have medical expenditures approximately 2.3 times higher than what expenditures would be in the absence of diabetes. For the cost categories analyzed, care for people with diagnosed diabetes accounts for more than 1 in 5 health care dollars in the U.S., and more than half of that expenditure is directly attributable to diabetes. Indirect costs include increased absenteeism ($5 billion) and reduced productivity while at work ($20.8 billion) for the employed population, reduced productivity for those not in the labor force ($2.7 billion), inability to work as a result of disease-related disability ($21.6 billion), and lost productive capacity due to early mortality ($18.5 billion). CONCLUSIONS The estimated total economic cost of diagnosed diabetes in 2012 is $245 billion, a 41% increase from our previous estimate of $174 billion (in 2007 dollars). This estimate highlights the substantial burden that diabetes imposes on society. Additional components of societal burden omitted from our study include intangibles from pain and suffering, resources from care provided by nonpaid caregivers, and the burden associated with undiagnosed diabetes.