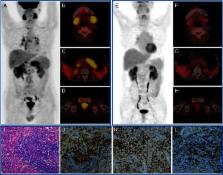 All 35 patients were found with 18F-FDG-avid hypermetabolic lesion(s); 97.1 % (34/35) of these patients showed multi-organ involvement. Among the 35 patients, 71.4 % (25/35) patients were found with more organ involvement on 18F-FDG PET/CT than conventional evaluations including physical examination, ultrasonography, and computed tomography (CT). 18F-FDG PET/CT demonstrated specific image characteristics and pattern of IgG4-RD, including diffusely elevated 18F-FDG uptake in the pancreas and salivary glands, patchy lesions in the retroperitoneal region and vascular wall, and multi-organ involvement that cannot be interpreted as metastasis. Comprehensive understanding of all involvement aided the biopsy-site selection in seven patients and the recanalization of ureteral obstruction in five patients. After 2 to 4 weeks of steroid-based therapy at 40 mg to 50 mg prednisone per day, 72.4 % (21/29) of the patients showed complete remission, whereas the others exhibited > 81.8 % decrease in 18F-FDG uptake.

F-FDG PET/CT is a useful tool for assessing organ involvement, monitoring therapeutic response, and guiding interventional treatment of IgG4-RD. The image pattern is suggested to be updated into the consensus diagnostic criteria for IgG4-RD.

Naoto Egawa,  Yukiko Hayashi,  M Koike … (2002)
Autoimmune pancreatitis (AIP) is occasionally associated with other autoimmune diseases. To investigate the pathophysiology of AIP, we immunohistochemically examined the pancreas and other organs in eight patients with AIP, and in controls, using anti-CD4-T and CD8-T cell subsets, as well as IgG4 antibodies. In AIP patients, severe or moderate infiltration of IgG4-positive plasma cells associated with CD4- or CD8-positive T lymphocytes was detected in the peripancreatic tissue (6/6), bile duct (8/8), gallbladder (8/8), portal area of the liver (3/3), gastric mucosa (5/7), colonic mucosa (2/2), salivary glands (1/2), lymph nodes (6/6), and bone marrow (2/2), as well as in the pancreas (8/8). There were few IgG4-positive plasma cells at the same sites in controls. These results suggest that AIP is not simply pancreatitis but that it is a pancreatic lesion involved in IgG4-related systemic disease with extensive organ involvement. We propose a new clinicopathological entity, of a systemic IgG4-related autoimmune disease in which AIP and its associated diseases might be involved. Autoimmune pancreatitis (AIP) is occasionally associated with other autoimmune diseases.

Recommendations for the nomenclature of IgG4-related disease and its individual organ system manifestations.