Southern Species From the Biodiversity Hotspot of Central Chile: A Source of Color, Aroma, and Metabolites for Global Agriculture and Food Industry in a Scenario of Climate Change 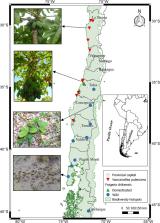 Two interesting plants within the Chilean flora (wild and crop species) can be found with a history related to modern fruticulture: Fragaria chiloensis subsp. chiloensis (Rosaceae) and Vasconcellea pubescens (Caricaceae). Both species have a wide natural distribution, which goes from the Andes mountains to the sea (East-West), and from the Atacama desert to the South of Chile (North-South). The growing locations are included within the Chilean Winter Rainfall-Valdivian Forest hotspot. Global warming is of great concern as it increases the risk of losing wild plant species, but at the same time, gives a chance for usually longer term genetic improvement using naturally adapted material and the source for generating healthy foods. Modern agriculture intensifies the attractiveness of native undomesticated species as a way to provide compounds like antioxidants or tolerant plants for climate change scenario. F. chiloensis subsp. chiloensis as the mother of commercial strawberry ( Fragaria × ananassa) is an interesting genetic source for the improvement of fruit flavor and stress tolerance. On the other hand, V. pubescens produces fruit with high level of antioxidants and proteolytic enzymes of interest to the food industry. The current review compiles the botanical, physiological and phytochemical description of F. chiloensis subsp. chiloensis and V. pubescens, highlighting their potential as functional foods and as source of compounds with several applications in the pharmaceutical, biotechnological, and food science. The impact of global warming scenario on the distribution of the species is also discussed.

Shuaizhang Feng,  Alan Krueger,  Michael Oppenheimer (2010)
Climate change is expected to cause mass human migration, including immigration across international borders. This study quantitatively examines the linkages among variations in climate, agricultural yields, and people's migration responses by using an instrumental variables approach. Our method allows us to identify the relationship between crop yields and migration without explicitly controlling for all other confounding factors. Using state-level data from Mexico, we find a significant effect of climate-driven changes in crop yields on the rate of emigration to the United States. The estimated semielasticity of emigration with respect to crop yields is approximately -0.2, i.e., a 10% reduction in crop yields would lead an additional 2% of the population to emigrate. We then use the estimated semielasticity to explore the potential magnitude of future emigration. Depending on the warming scenarios used and adaptation levels assumed, with other factors held constant, by approximately the year 2080, climate change is estimated to induce 1.4 to 6.7 million adult Mexicans (or 2% to 10% of the current population aged 15-65 y) to emigrate as a result of declines in agricultural productivity alone. Although the results cannot be mechanically extrapolated to other areas and time periods, our findings are significant from a global perspective given that many regions, especially developing countries, are expected to experience significant declines in agricultural yields as a result of projected warming.

Jacob A. Tennessen,  Rajanikanth Govindarajulu,  Tia-Lynn Ashman … (2014)
Whole-genome duplications are radical evolutionary events that have driven speciation and adaptation in many taxa. Higher-order polyploids have complex histories often including interspecific hybridization and dynamic genomic changes. This chromosomal reshuffling is poorly understood for most polyploid species, despite their evolutionary and agricultural importance, due to the challenge of distinguishing homologous sequences from each other. Here, we use dense linkage maps generated with targeted sequence capture to improve the diploid strawberry (Fragaria vesca) reference genome and to disentangle the subgenomes of the wild octoploid progenitors of cultivated strawberry, Fragaria virginiana and Fragaria chiloensis. Our novel approach, POLiMAPS (Phylogenetics Of Linkage-Map-Anchored Polyploid Subgenomes), leverages sequence reads to associate informative interhomeolog phylogenetic markers with linkage groups and reference genome positions. In contrast to a widely accepted model, we find that one of the four subgenomes originates with the diploid cytoplasm donor F. vesca, one with the diploid Fragaria iinumae, and two with an unknown ancestor close to F. iinumae. Extensive unidirectional introgression has converted F. iinumae-like subgenomes to be more F. vesca-like, but never the reverse, due either to homoploid hybridization in the F. iinumae-like diploid ancestors or else strong selection spreading F. vesca-like sequence among subgenomes through homeologous exchange. In addition, divergence between homeologous chromosomes has been substantially augmented by interchromosomal rearrangements. Our phylogenetic approach reveals novel aspects of the complicated web of genetic exchanges that occur during polyploid evolution and suggests a path forward for unraveling other agriculturally and ecologically important polyploid genomes.

Hugo Neto,  Stefano Bompadre,  Sara Tulipani … (2008)
Strawberry contains high levels of micronutrients and phytochemical compounds. These exhibit functional roles in plant growth and metabolism and are also essential for the nutritional and organoleptic qualities of the fruit. The aim of the present work was to better characterize the phytochemical and antioxidant profiles of the fruit of nine different genotypes of strawberry, by measuring the total flavonoid, anthocyanin, vitamin C, and folate contents. Cultivar effects on the total antioxidant capacities of strawberries were also tested. In addition, the individual contribution of the main antioxidant compounds was assessed by HPLC separation coupled to an online postcolumn antioxidant detection system. This study showed the important role played by the genetic background on the chemical and antioxidant profiles of strawberry fruits. Significant differences were found between genotypes for the total antioxidant capacity and for all tested classes of compounds. The HPLC analyses confirmed qualitative and quantitative variability in the antioxidant profiles. These studies show that differences exist among cultivars, applicable in dietary studies in human subjects.