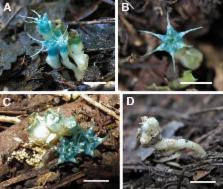 Oxygyne Schltr. (Thismiaceae) is a rare and little-known genus of achlorophyllous mycoheterotrophic perennial herbs with one of the most remarkable distributions of all angiosperm plant genera globally, being disjunct between Japan and West–Central Africa. Each species is known only from a single location, and in most cases from a single specimen. This monographic study names, describes and maps two new species, Oxygyne duncanii Cheek from cloud forest in SW Region Cameroon and O. frankei Cheek from gallery forest in the Central African Republic , representing the first new Oxygyne species described from Africa in 112 years, and raising the number of described Oxygyne species from four to six. Oxygyne duncanii is remarkable for sharing more morphological characters with two of the three Japanese species ( O. hyodoi C.Abe & Akasawa, O. shinzatoi (H. Ohashi) Tsukaya) than with the geographically much closer type species of the genus, O. triandra from Mt Cameroon. Based mainly on herbarium specimens and field observations made in Cameroon and Japan during a series of botanical surveys, we provide descriptions, synonymy, mapping and extinction risk assessments for each species of Oxygyne, together with keys to the genera of Thismiaceae and the species of Oxygyne. The subterranean structures of African Oxygyne are described for the first time, and found to be consistent with those of the Japanese species. We review and reject an earlier proposal that the Japanese species should be segregated from the African species as a separate genus, Saionia Hatus. The only character that separates the two disjunct species groups is now flower colour: blue or partly-blue in the Japanese species compared with orange-brown in the African species. Studies of the pollination biology and mycorrhizal partners of Oxygyne are still lacking. Two of the six species, O. triandra Schltr. and O. hyodoi, appear to be extinct, and the remaining four are assessed as Critically Endangered using the IUCN 2012 criteria. To avoid further extinction, an urgent requirement is for conservation management of the surviving species in the wild. Since few achlorophyllous mycoheterotrophs have been successfully cultivated from seed to maturity, ex situ conservation will not be viable for these species and protection in the wild is the only viable option. While natural habitat survives, further botanical surveys could yet reveal additional new species between Central Africa and Japan.

Phylogeny and evolution of Burmanniaceae (Dioscoreales) based on nuclear and mitochondrial data.

Vincent Merckx,  Suzy Huysmans,  Hiltje Maas-van de Kamer … (2006)
The mycoheterotrophic Burmanniaceae are one of the three families currently recognized in the order Dioscoreales. Phylogenetic inference using nucleotide sequences of the nuclear 18S rDNA region and the mitochondrial nad1 b-c intron revealed two well-supported, major lineages within the family, corresponding to the two tribes recognized in the family: Burmannieae and Thismieae. All data supported a strong relationship between Thismieae and Tacca (Dioscoreaceae) making both Burmanniaceae and Dioscoreaceae polyphyletic. The three largest Burmanniaceae genera, Burmannia, Gymnosiphon, and Thismia, are paraphyletic. The splitting of Burmanniaceae into Burmannieae and Thismieae indicates two independent origins of mycoheterotrophy and correlated loss of chlorophyll in Dioscoreales. In the genus Burmannia, in which many species still contain chlorophyll, the achlorophyllous species are nested in between the autotrophic species, suggesting many independent changes from autotrophy to heterotrophy or vice versa. A Bayesian relative rates test on the 18S rDNA data showed considerable variation in substitution rates among Burmanniaceae. The substitution rates in all Thismieae and many Burmannieae are significantly faster than in Dioscoreaceae, but there seems to be no correlation between rate increases and the loss of photosynthesis.

Breakdown and delayed cospeciation in the arbuscular mycorrhizal mutualism.

Martin Bidartondo,  Vincent Merckx (2008)
The ancient arbuscular mycorrhizal association between the vast majority of plants and the fungal phylum Glomeromycota is a dominant nutritional mutualism worldwide. In the mycorrhizal mutualism, plants exchange photosynthesized carbohydrates for mineral nutrients acquired by fungi from the soil. This widespread cooperative arrangement is broken by 'cheater' plant species that lack the ability to photosynthesize and thus become dependent upon three-partite linkages (cheater-fungus-photosynthetic plant). Using the first fine-level coevolutionary analysis of mycorrhizas, we show that extreme fidelity towards fungi has led cheater plants to lengthy evolutionary codiversification. Remarkably, the plants' evolutionary history closely mirrors that of their considerably older mycorrhizal fungi. This demonstrates that one of the most diffuse mutualistic networks is vulnerable to the emergence, persistence and speciation of highly specific cheaters.