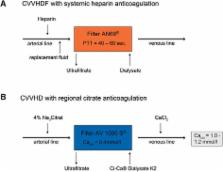 Regional citrate anticoagulation (RCA) is being increasingly used during continuous renal replacement therapy (CRRT) in intensive care units as an alternative to systemic heparin anticoagulation. However, due to its availability in a variety of solutions and dialysis systems, RCA is still considered a complex intervention, possibly leading to confusion and pitfalls in everyday practice. We therefore tested retrospectively if the introduction of RCA as a new anticoagulation strategy for CRRT was feasible and had not negatively impacted efficacy, safety, metabolic stability, filter lifetime, and cost-effectiveness compared to well-established systemic heparin.

This observational, retrospective study was performed on a non-cardiac surgical and trauma intensive care unit (ICU) in a university hospital. All charts of patients receiving one of the CRRT techniques from May 2006 to April 2010 were reviewed. The first 60 consecutive patients receiving CRRT with regional citrate anticoagulation after its implementation in February 2008 (continuous veno-venous haemodialysis, Multifiltrate® with integrated CiCa® system, AV 1000 S® filter, n = 60) were included in the study. The last 50 consecutive patients with systemic heparin anticoagulation therapy (continuous veno-venous haemodiafiltration, PRISMAFLEX®, AN69® filter, n = 50), treated immediately before the introduction of RCA, were used as a historic control group.

Our results suggest that the implementation of regional citrate anticoagulation was safe and effective. Due to the retrospective design of the study and inherent limitations therein concerning several baseline parameters, i.e. different filters, modes of dialysis, and flow parameters not having been standardized, we were unable to draw a causative effect relationship. Nonetheless, our results warrant further study.

Citrate vs. heparin for anticoagulation in continuous venovenous hemofiltration: a prospective randomized study.

Didier Ledoux,  Bernard Dubois,  Jean-Luc Canivet … (2004)
To compare the efficacy and safety of adjusted-dose unfractionated heparin with that of regional citrate anticoagulation in intensive care patients treated by continuous venovenous hemofiltration (CVVH). Prospective, randomized, clinical trial in a 32-bed medical and surgical ICU in a university teaching hospital. ICU patients with acute renal failure requiring continuous renal replacement therapy, without cirrhosis, severe coagulopathy, or known sensitivity to heparin. Before the first CVVH run patients were randomized to receive anticoagulation with heparin or trisodium citrate. Patients eligible for another CVVH run received the other study medication in a cross-over fashion until the fourth circuit. Forty-nine circuits (hemofilters) were analyzed: 23 with heparin and 26 with citrate. The median lifetime of hemofilters was 70 h (interquartile range 44-140) with citrate anticoagulation and 40 h (17-48) with heparin (p=0.0007). One major bleeding occurred during heparin anticoagulation and one metabolic alkalosis (pH=7.60) was noted with citrate after a protocol violation. Transfusion rates (units of red cells per day of CVVH) were, respectively, 0.2 (0.0-0.4) with citrate and 1.0 (0.0-2.0) with heparin (p=0.0008). Regional citrate anticoagulation seems superior to heparin for the filter lifetime and transfusion requirements in ICU patients treated by continuous renal replacement therapy.