Partial Predictability in Avoidance Acquisition and Expression of Wistar-Kyoto and Sprague-Dawley Rats: Implications for Anxiety Vulnerability in Uncertain Situations 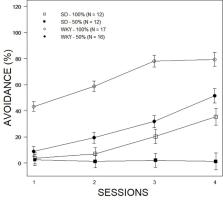 Individual differences or vulnerabilities must exist which bias some individuals toward psychopathology while others remain resilient in the face of trauma. Recent work has studied the effects of uncertainty on individuals expressing behavioral inhibition (BI). The current study extended this work with uncertainty to Wistar Kyoto (WKY) rats which are a behaviorally inhibited inbred strain that models learning vulnerabilities for anxiety disorders and posttraumatic stress disorder (PTSD). WKY rats exhibit superior avoidance performance in a signaled bar press avoidance task in which a tone conditioned stimulus (CS) signals a foot shock unconditional stimulus (US) when compared with non-inhibited Sprague-Dawley (SD) rats. In addition, WKY rats express enhanced eyeblink conditioning. Recent work with behaviorally inhibited humans has indicated that this enhanced eyeblink conditioning is more evident in conditions that insert CS- or US-alone trials into CS-US paired training, resulting in uncertain and suboptimal learning conditions. The current study examined the effects of partial predictability training, in which the CS signaled the US only one-half of the time, on the acquisition and expression of avoidance. Standard training with a fixed 60-s CS which predicted shock on 100% of trials was compared with training in which the CS predicted shock on 50% of trials (partial predictability) using a pseudorandom schedule. As expected, WKY rats acquired avoidance responses faster and to a greater degree than SD rats. Partial predictability of the US essentially reduced SD rats to escape responding. Partial predictability also reduced avoidance in WKY rats; however, adjusting avoidance rates for the number of potential pairings of the CS and US early in training suggested a similar degree of avoidance expression late in the last session of training. Enhanced active avoidance expression, even in uncertain learning conditions, can be interpreted as behaviorally inhibited WKY rats responding to the expectancy of the shock by avoiding, whereas non-inhibited SD rats were responding to the presence of the shock by escaping. Future work should explore how WKY and SD rats as well as behaviorally inhibited humans acquire and extinguish avoidance responses in uncertain learning situations.

Stable behavioral inhibition and its association with anxiety disorder.

Carl Schwartz,  Christopher I Wright,  Lisa Shin … (2003)
As a prelude to future studies of subjects with different temperaments, we sought to develop a probe to measure differential amygdalar responses to novel versus familiar stimuli. Prior neuroimaging studies of the amygdala in humans to date have focused principally on responses to emotional stimuli, primarily aversive, rather than to novelty per se. Eight normal subjects aged 22.4 +/- 1.3 years were scanned using functional magnetic resonance imaging (fMRI) during passive viewing of novel and familiar faces. Using this newly developed paradigm, we found greater fMRI blood oxygenation level dependent (BOLD) signal response within the right amygdala to novel versus familiar faces--all with neutral expression. Furthermore, although a new facial identity was always presented in the novel condition, signal in the amygdala declined over time as it did for the familiar condition. These results suggest that at least one primary function of the amygdala is to detect and process unexpected or unfamiliar events that have potential biological import, of which stimuli symbolic of fear or threat are but one possible example. We propose that this experimental paradigm will be useful for examining brain responses to novelty in different temperamental groups, as well as various psychiatric disorders.

This article was submitted to Mood and Anxiety Disorders, a section of the journal Frontiers in Psychiatry