Neutrophil–lymphocyte ratio as an early new marker in AIV-H7N9-infected patients: a retrospective study 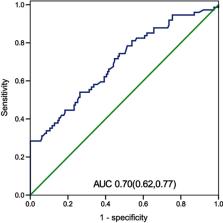 Background: Avian AIV-H7N9 influenza progresses rapidly and has a high fatality rate. However, it lacks an early effective biomarker to predict disease severity and fatal outcomes successfully. Our study aimed to explore whether the neutrophil-to-lymphocyte ratio (NLR) taken within 24 h after admission can predict disease severity and fatality in AIV-H7N9-infected patients.

Methods: We retrospectively studied 237 AIV-H7N9-infected patients from multiple centers from 2013 to 2015. We used univariate analysis and multivariate analysis to compare clinical variables between the survival and fatal groups to evaluate the prognostic value.

Results: The NLR taken within 24 h after admission in the fatal group was significantly higher than that in the survival group ( P<0.01). Our study found that NLR was independently associated with fatality. The area under the curve (AUC) of the NLR was 0.70, and moreover, when the NLR =19.94, the specificity was 100%, and the sensitivity was 28.4%. The fatality in the NLR ≥19.94 group was significantly increased relative to the patients with an NLR <19.94 ( P<0.05).

Conclusion: The NLR is potentially a predictive prognostic biomarker in patients infected with the AIV-H7N9 influenza virus.

Olivia Z. Cheng,  Nades Palaniyar,  Stephen Waggoner (2013)
Neutrophil extracellular traps (NETs) are beneficial antimicrobial defense structures that can help fight against invading pathogens in the host. However, recent studies reveal that NETs exert adverse effects in a number of diseases including those of the lung. Many inflammatory lung diseases are characterized with a massive influx of neutrophils into the airways. Neutrophils contribute to the pathology of these diseases. To date, NETs have been identified in the lungs of cystic fibrosis (CF), acute lung injury (ALI), allergic asthma, and lungs infected with bacteria, virus, or fungi. These microbes and several host factors can stimulate NET formation, or NETosis. Different forms of NETosis have been identified and are dependent on varying types of stimuli. All of these pathways however appear to result in the formation of NETs that contain DNA, modified extracellular histones, proteases, and cytotoxic enzymes. Some of the NET components are immunogenic and damaging to host tissue. Innate immune collectins, such as pulmonary surfactant protein D (SP-D), bind NETs, and enhance the clearance of dying cells and DNA by alveolar macrophages. In many inflammatory lung diseases, bronchoalveolar SP-D levels are altered and its deficiency results in the accumulation of DNA in the lungs. Some of the other therapeutic molecules under consideration for treating NET-related diseases include DNases, antiproteases, myeloperoxidase (MPO) inhibitors, peptidylarginine deiminase-4 inhibitors, and anti-histone antibodies. NETs could provide important biological advantage for the host to fight against certain microbial infections. However, too much of a good thing can be a bad thing. Maintaining the right balance of NET formation and reducing the amount of NETs that accumulate in tissues are essential for harnessing the power of NETs with minimal damage to the hosts.