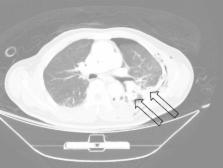 Retained haemothorax and pneumothorax are the most common complications after blunt chest traumas. Lung lacerations derived from fractures of the ribs are usually found in these patients. Video-assisted thoracoscopic surgery (VATS) is usually used as a routine procedure in the treatment of retained pleural collections. The objective of this study was to find out if there is any advantage in adding the procedure for repairing lacerated lungs during VATS.

Patients who were brought to our hospital with blunt chest trauma were enrolled into this prospective cohort study from January 2004 to December 2011. All enrolled patients had rib fractures with type III lung lacerations diagnosed by CT scans. They sustained retained pleural collections and surgical drainage was indicated. On one group, only evacuation procedure by VATS was performed. On the other group, not only evacuations but also repair of lung injuries were performed. Patients with penetrating injury or blunt injury with massive bleeding, that required emergency thoracotomy, were excluded from the study, in addition to those with cardiovascular or oesophageal injuries.

During the study period, 88 patients who underwent thoracoscopy were enrolled. Among them, 43 patients undergoing the simple thoracoscopic evacuation method were stratified into Group 1. The remaining 45 patients who underwent thoracoscopic evacuation combined with resection of lung lacerations were stratified into Group 2. The rates of post-traumatic infection were higher in Group 1. The durations of chest-tube drainage and ventilator usage were shorter in Group 2, as were the lengths of patient intensive care unit stay and hospital stay.

When compared with simple thoracoscopic evacuation methods, repair and resection of the injured lungs combined may result in better clinical outcomes in patients who sustained blunt chest injuries.

David F. B. Miller,  Luís Bar,  Andrea Richardson … (1995)
To determine the complication rate and risk factors associated with tube thoracostomy (TT) in the trauma patient. Retrospective hospital chart review. Level I trauma center. Four hundred twenty-six consecutive patients who underwent TT were initially reviewed; 47 deaths occurred unrelated to TT placement. The remaining 379 patients required 599 tubes and composed the study population. The determination of adverse outcomes related to TT, including thoracic empyema, undrained hemothorax or pneumothorax, improper tube positioning, post-tube removal complications, and direct injuries to the lung. The overall complication rate was 21% per patient. Although complications were not related to the Injury Severity Score, the presence of shock, admission to the intensive care unit, and the need for mechanical ventilation were associated with the increased incidence of complications. There were fewer complications (6%) when the TT was performed by a surgeon compared with TT performed by an emergency physician (13%, P < .0001) or TT performed prior to transfer to our hospital (38%, P < .0001). Tube thoracostomy is associated with significant morbidity. The striking difference in the complication rate between surgeons and other physicians who perform this procedure suggests that additional training may be indicated.

Mahmoud Ibrahim,  B D’Agostino,  Patricia Carrascosa … (2007)
This pictorial review discusses multi-detector computed tomography (MDCT) cases of non-vascular traumatic chest injuries, with a brief clinical and epidemiological background of each of the pathology. The purpose of this review is to familiarize the reader with common and rare imaging patterns of chest trauma and substantiate the advantages of MDCT as a screening and comprehensive technique for the evaluation of these patients. Images from a level 1 trauma center were reviewed to illustrate these pathologies. Pulmonary laceration, pulmonary hernia, and their different degrees of severity are illustrated as examples of parenchymal traumatic lesions. Pleural space abnormalities (pneumothorax and hemothorax) and associated complications are shown. Diaphragmatic rupture, fracture of the sternum, sternoclavicular dislocation, fracture of the scapula, rib fracture, and flail chest are shown as manifestations of blunt trauma to the chest wall. Finally, direct and indirect imaging findings of intrathoracic airway rupture and post-traumatic foreign bodies are depicted. The advantage of high quality reconstructions, volume rendered images, and maximal intensity projection for the detection of severe complex traumatic injuries is stressed. The limitations of the initial chest radiography and the benefits of MDCT authenticate this imaging technique as the best modality in the diagnosis of chest trauma.

The first two authors contributed equally to this work.

This is an Open Access article distributed under the terms of the Creative Commons Attribution Non-Commercial License ( http://creativecommons.org/licenses/by-nc/3.0/), which permits non-commercial re-use, distribution, and reproduction in any medium, provided the original work is properly cited. For commercial re-use, please contact journals.permissions@oup.com