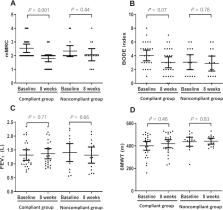 Pulmonary rehabilitation (PR) is a well-established treatment for chronic obstructive pulmonary disease (COPD). The standard protocol for PR requires frequent hospital visits, which can be difficult for patients. We performed this study to assess whether unsupervised home-based PR (HBPR) is effective for patients with COPD.

After assessing the outcome data, including the results of a COPD assessment test (CAT); the body mass index, airflow obstruction, dyspnea, and exercise capacity (BODE) index; a spirometry; the modified Medical Research Council (mMRC) dyspnea scale; and the 6-min walking test (6MWT), specialists imparted 1-hour education to patients regarding unsupervised HBPR at the baseline visit. This included methods for breathing, inhaler use, stretching, and exercise. On reviewing diaries after 8 weeks from the first visit, patients who exercised at least thrice per week were classified as the compliant group and the others were categorized as the noncompliant group. Changes in the outcomes were compared between the compliant and noncompliant groups.

Physical activity is the strongest predictor of all-cause mortality in patients with COPD: a prospective cohort study.

K M Beeh,  Jadwiga Wedzicha,  Jace W. Jones … (2014)
The concept of a minimal clinically important difference (MCID) is well established. Here, we review the evidence base and methods used to define MCIDs as well as their strengths and limitations. Most MCIDs in chronic obstructive pulmonary disease (COPD) are empirically derived estimates applying to populations of patients. Validated MCIDs are available for many commonly used outcomes in COPD, including lung function (100 ml for trough FEV1), dyspnea (improvement of ≥ 1 unit in the Transition Dyspnea Index total score or 5 units in the University of California, San Diego Shortness of Breath Questionnaire), health status (reduction of 4 units in the St George's Respiratory Questionnaire total score), and exercise capacity (47.5 m for the incremental shuttle walking test, 45-85 s for the endurance shuttle walking test, and 46-105 s for constant-load cycling endurance tests), but there is currently no validated MCID for exacerbations. In a clinical trial setting, many factors, including study duration, withdrawal rate, baseline severity, and Hawthorne effects, can influence the measured treatment effect and determine whether it reaches the MCID. We also address recent challenges presented by clinical trials that compare active treatments and suggest that MCIDs should be used to identify the additional proportion of patients who benefit, for example, when one drug is replaced by another or when a second drug is added to a first. We propose the term "minimum worthwhile incremental advantage" to describe this parameter.