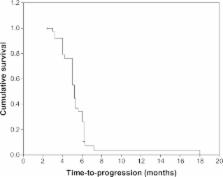 This retrospective study evaluates the efficacy and safety of S-1 chemotherapy for recurrent and metastatic nasopharyngeal carcinoma patients after failure of platinum-based chemotherapy.

S-1 monotherapy is considered a safe and effective treatment option for recurrent and metastatic nasopharyngeal carcinoma patients after failure of platinum-based chemotherapy.

Design of a novel oral fluoropyrimidine carbamate, capecitabine, which generates 5-fluorouracil selectively in tumours by enzymes concentrated in human liver and cancer tissue.

M Miwa,  M Ura,  M Nishida … (1998)
Capecitabine (N4-pentyloxycarbonyl-5'-deoxy-5-fluorocytidine) is a novel oral fluoropyrimidine carbamate, which is converted to 5-fluorouracil (5-FU) selectively in tumours through a cascade of three enzymes. The present study investigated tissue localisation of the three enzymes in humans, which was helpful for us to design the compound. Carboxylesterase was almost exclusively located in the liver and hepatoma, but not in other tumours and normal tissue adjacent to the tumours. Cytidine (Cyd) deaminase was located in high concentrations in the liver and various types of solid tumours. Finally, thymidine phosphorylase (dThdPase) was also more concentrated in various types of tumour tissues than in normal tissues. These unique tissue localisation patterns enabled us to design capecitabine. Oral capecitabine would pass intact through the intestinal tract, but would be converted first by carboxylesterase to 5'-deoxy-5-fluorocytidine (5'-dFCyd) in the liver, then by Cyd deaminase to 5'-deoxy-5-fluorouridine (5'-dFUrd) in the liver and tumour tissues and finally by dThdPase to 5-FU in tumours. In cultures of human cancer cell lines, the highest level of cytotoxicity was shown by 5-FU itself, followed by 5'-dFUrd. Capecitabine and 5'-dFCyd had weak cytotoxic activity only at high concentrations. The cytotoxicity of the intermediate metabolites 5'-dFCyd and 5'-dFCyd was suppressed by inhibitors of Cyd deaminase and dThdPase, respectively, indicating that these metabolites become effective only after their conversion to 5-FU. Capecitabine, which is finally converted to 5-FU by dThdPase in tumours, should be much safer and more effective than 5-FU, and this was indeed the case in the HCT116 human colon cancer and the MX-1 breast cancer xenograft models.

Development of a novel form of an oral 5-fluorouracil derivative (S-1) directed to the potentiation of the tumor selective cytotoxicity of 5-fluorouracil by two biochemical modulators.

M Yamaguchi,  H Ohshimo,  M. Fukushima … (1996)
We have focused our attention on the development of a novel form of a tegafur-based [FT; a prodrug of 5-fluorouracil (5-FU)] antitumor agent. We have used two biochemical and pharmacological modulators of 5-FU to improve its overall activity. To potentiate the antitumor activity of FT, 5-chloro-2,4-dihydroxypyridine (CDHP) was used as a potent reversible inhibitor of 5-FU degradation. The reduction of gastrointestinal (GI) toxicity, induced in the host by 5-FU, was modulated by potassium oxonate (Oxo), an inhibitor of orotate phosphoribosyltransferase that catalyzes the phosphorylation of 5-FU, a process believed to be responsible for the toxic effects of 5-FU. When CDHP and FT were simultaneously given orally to Yoshida sarcoma-bearing rats in various molar ratios, the antitumor effect of FT was significantly potentiated by the combination consisting of at least a 0.2 versus 1 molar ratio of CDHP to FT, respectively. This augmentation of an antitumor activity was supported by potent and prolonged inhibition of dihydrouracil dehydrogenase activity (5-FU degrading activities) in the liver of tumor-bearing rats after oral CDHP (0.2:0.8 molar ratio) and furthermore by elevation and over 12 h retention of 5-FU levels in the tumors following combined administration of FT and CDHP at a molar ratio of 1:0.4, respectively. Moreover, to reduce the severe GI injury and subsequent loss of body weight, observed in parallel with an increased antitumor efficacy, Oxo was given orally to Yoshida sarcoma-bearing rats and nude rats xenografted with H-81 human gastric carcinoma, during consecutive administration of the FT-CDHP mixture. Combined treatment with Oxo and FT (1:2 molar ratio) supplemented with 0.4 molar CDHP resulted in protection of body weight loss without affecting the high antitumor efficacy of the FT-CDHP mixture. When [2-14C]FT plus CDHP was administered with Oxo, the 14C-labeled fluoronucleotide content was objectively decreased in the GI tract of the tumor-bearing rats but not in the tumor and bone marrow, which supports our initial hypothesis. Based on these promising data, we propose a suitable formulation of a FT-based anticancer drug, called S-1, and consisting of FT, CDHP and Oxo at a 1:0.4:1 molar ratio and showing tumor-selective cytotoxicity of 5-FU.

Jian Yuan,  Vionnie W C Yu (2002)
Nasopharyngeal carcinoma (NPC) is a rare malignancy in most parts of the world, with an incidence well under 1 per 100,000 person-years. Exceptions are the Chinese, especially the Cantonese living in the central region of Guangdong Province in Southern China. Other populations with elevated rates include the natives of Southeast Asia, the natives of the Artic region, and the Arabs of North Africa and parts of the Middle East. Intake of preserved foods at an early age has been linked to NPC risk in all population groups with increased NPC rates. Other recognized risk factors for NPC are cigarette smoking, and occupational exposure to formaldehyde and wood dust. Copyright 2002 Elsevier Science Ltd.