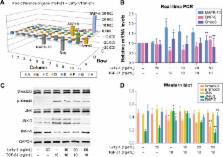 Tissue repair, contraction, and the myofibroblast.

Alexis Desmoulière,  Christine Chaponnier,  Giulio Gabbiani (2015)
After the first description of the myofibroblast in granulation tissue of an open wound by means of electron microscopy, as an intermediate cell between the fibroblast and the smooth muscle cell, the myofibroblast has been identified both in normal tissues, particularly in locations where there is a necessity of mechanical force development, and in pathological tissues, in relation with hypertrophic scarring, fibromatoses and fibrocontractive diseases as well as in the stroma reaction to epithelial tumors. It is now accepted that fibroblast/myofibroblast transition begins with the appearance of the protomyofibroblast, whose stress fibers contain only beta- and gamma-cytoplasmic actins and evolves, but not necessarily always, into the appearance of the differentiated myofibroblast, the most common variant of this cell, with stress fibers containing alpha-smooth muscle actin. Myofibroblast differentiation is a complex process, regulated by at least a cytokine (the transforming growth factor-beta1), an extracellular matrix component (the ED-A splice variant of cellular fibronectin), as well as the presence of mechanical tension. The myofibroblast is a key cell for the connective tissue remodeling that takes place during wound healing and fibrosis development. On this basis, the myofibroblast may represent a new important target for improving the evolution of such diseases as hypertrophic scars, and liver, kidney or pulmonary fibrosis.

Role of the TGF-β/BMP-7/Smad pathways in renal diseases.

Arthur Chung,  Y. LAN,  Daniel Chung … (2013)
TGF-β (transforming growth factor-β) and BMP-7 (bone morphogenetic protein-7), two key members in the TGF-β superfamily, play important but diverse roles in CKDs (chronic kidney diseases). Both TGF-β and BMP-7 share similar downstream Smad signalling pathways, but counter-regulate each other to maintain the balance of their biological activities. During renal injury in CKDs, this balance is significantly altered because TGF-β signalling is up-regulated by inducing TGF-β1 and activating Smad3, whereas BMP-7 and its downstream Smad1/5/8 are down-regulated. In the context of renal fibrosis, Smad3 is pathogenic, whereas Smad2 and Smad7 are renoprotective. However, this counter-balancing mechanism is also altered because TGF-β1 induces Smurf2, a ubiquitin E3-ligase, to target Smad7 as well as Smad2 for degradation. Thus overexpression of renal Smad7 restores the balance of TGF-β/Smad signalling and has therapeutic effect on CKDs. Recent studies also found that Smad3 mediated renal fibrosis by up-regulating miR-21 (where miR represents microRNA) and miR-192, but down-regulating miR-29 and miR-200 families. Therefore restoring miR-29/miR-200 or suppressing miR-21/miR-192 is able to treat progressive renal fibrosis. Furthermore, activation of TGF-β/Smad signalling inhibits renal BMP-7 expression and BMP/Smad signalling. On the other hand, overexpression of renal BMP-7 is capable of inhibiting TGF-β/Smad3 signalling and protects the kidney from TGF-β-mediated renal injury. This counter-regulation not only expands our understanding of the causes of renal injury, but also suggests the therapeutic potential by targeting TGF-β/Smad signalling or restoring BMP-7 in CKDs. Taken together, the current understanding of the distinct roles and mechanisms of TGF-β and BMP-7 in CKDs implies that targeting the TGF-β/Smad pathway or restoring BMP-7 signalling may represent novel and effective therapies for CKDs.

Fibroblasts and myofibroblasts: what are we talking about?

Martina Baum,  Frank Duffy (2011)
Cardiac myocytes, although large enough to make up most of the heart volume, are only a minority of cells within the heart with fibroblasts and blood vessel components (endothelial and smooth muscle cells) making up the remainder of the heart. In recent years, there has been increasing interest in the nonmyocyte population within the heart. This is attributable, in part, to our increasing understanding of the biology of the nonmyocyte cell types and additionally it is the result of our awakening realization that these cells are not static but rather that they are dynamic in nature indicating that they play a more active role in cardiac function than previously imagined. Studies now show that fibroblasts are involved in formation of the extracellular matrix and they control the size of the extracellular matrix. Additionally, they participate in the repair process by differentiating into myofibroblasts, which are cells involved in the inflammatory response to injury. Myofibroblasts migrate to the sites of injury where they produce cytokines, thus enhancing the inflammatory response. This review discusses both structural and functional differences between the two cell types and examines the different roles of these two different cell types in the heart.