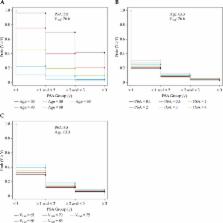 To develop a model for prostate specific antigen (PSA) values at one year among patients treated with intraoperatively planned 125I prostate brachytherapy (IOPB).

Four hundred and deven patients treated with IOPB for prostate adenocarcinoma were divided into four groups: those with PSA values ≥ 3 ng/ml; < 3 and ≥ 2; < 2 and ≥ 1 or PSA < 1 between 10.5 and 14.5 months post implantation (1yPSA). Ordinal regression analysis was then performed between patient, tumor, and treatment characteristics. 1yPSA values were also compared with toxicity outcomes.

Thomas T. Wheeler,  P Scardino,  Omar Kattan (1999)
Although models exist that place patients into discrete groups at various risks for disease recurrence after surgery for prostate cancer, we know of no published work that combines pathologic factors to predict an individual's probability of disease recurrence. Because clinical stage and biopsy Gleason grade only approximate pathologic stage and Gleason grade in the prostatectomy specimen, prediction of prognosis should be more accurate when postoperative information is added to preoperative variables. Therefore, we developed a postoperative nomogram that allows more accurate prediction of probability for disease recurrence for patients who have received radical prostatectomy as treatment for prostate cancer, compared with the preoperative nomogram we previously published. By Cox proportional hazards regression analysis, we modeled the clinical and pathologic data and disease follow-up for 996 men with clinical stage T1a-T3c NXM0 prostate cancer who were treated with radical prostatectomy by a single surgeon at our institution. Prognostic variables included pretreatment serum prostate-specific antigen level, specimen Gleason sum, prostatic capsular invasion, surgical margin status, seminal vesicle invasion, and lymph node status. Treatment failure was recorded when there was either clinical evidence of disease recurrence, a rising serum prostate-specific antigen level (two measurements of 0.4 ng/mL or greater and rising), or initiation of adjuvant therapy. Validation was performed on this set of men and a separate sample of 322 men from five other surgeons' practices from our institution. Cancer recurrence was noted in 189 of the 996 men, and the recurrence-free group had a median follow-up period of 37 months (range, 1 to 168 months). The 7-year recurrence-free probability for the cohort was 73% (95% confidence interval, 68% to 76%). The predictions from the nomogram appeared to be accurate and discriminating, with a validation sample area under the receiver operating characteristic curve (ie, a comparison of the predicted probability with the actual outcome) of 0.89. A postoperative nomogram has been developed that can be used to predict the 7-year probability of disease recurrence among men treated with radical prostatectomy.

Louis Potters,  P Kupelian,  T. Carlson … (2004)
To review the biochemical relapse-free survival (bRFS) rates after treatment with permanent seed implantation (PI), external beam radiotherapy (EBRT) or =72 Gy (EBRT > or =72), combined seeds and EBRT (COMB), or radical prostatectomy (RP) for clinical Stage T1-T2 localized prostate cancer treated between 1990 and 1998. The study population comprised 2991 consecutive patients treated at the Cleveland Clinic Foundation or Memorial Sloan Kettering at Mercy Medical Center. All cases had pretreatment prostate-specific antigen (iPSA) levels and biopsy Gleason scores (bGSs). Neoadjuvant androgen deprivation for or =72 for 301 (10%), PI for 950 (32%), and COMB for 222 patients (7%). The RP, EBRT or =72, and 154 PI patients were treated at Cleveland Clinic Foundation. The median radiation doses in EBRT or =72 case was 68.4 and 78.0 Gy, respectively. The median follow-up time for all cases was 56 months (range 12-145). The median follow-up time for RP, EBRT or =72, PI, and COMB was 66, 75, 49, 47, and 46 months, respectively. Biochemical relapse was defined as PSA levels >0.2 for RP cases and three consecutive rising PSA levels (American Society for Therapeutic Radiology Oncology consensus definition) for all other cases. A multivariate analysis for factors affecting the bRFS rates was performed using the following variables: clinical T stage, iPSA, bGS, androgen deprivation, year of treatment, and treatment modality. The multivariate analysis was repeated excluding the EBRT or =72, PI, and COMB was 81%, 51%, 81%, 83%, and 77%, respectively (p or =72, PI, and COMB was 76%, 48%, 81%, 75%, and 77%, respectively. Multivariate analysis, including all cases, showed iPSA (p or =72 Gy) EBRT, COMB, and RP for localized prostate cancer. The outcomes were significantly worse for low-dose (<72 Gy) EBRT.