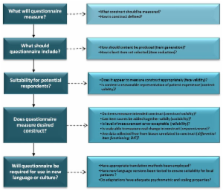 Interest in the patient's views of his or her illness and treatment has increased dramatically. However, our ability to appropriately measure such issues lags far behind the level of interest and need. Too often such measurement is considered to be a simple and trivial activity that merely requires the application of common sense. However, good quality measurement of patient-reported outcomes is a complex activity requiring considerable expertise and experience. This review considers the most important issues related to such measurement in the context of chronic disease and details how instruments should be developed, validated and adapted for use in additional languages. While there is often consensus on how best to undertake these activities, there is generally little evidence to support such accord. The present article questions these orthodox views and suggests alternative approaches that have been shown to be effective.

Assessing and adjusting for cross-cultural validity of impairment and activity limitation scales through differential item functioning within the framework of the Rasch model: the PRO-ESOR project.

Gemma Lawton,  Maria Tripolski,  Alan Tennant … (2003)
In Europe it is common for outcome measures to be translated for use in other languages. This adaptation may be complicated by culturally specific approaches to certain tasks; for example, bathing. In this context the issue of cross-cultural validity becomes paramount. To facilitate the pooling of data in international studies, a project set out to evaluate the cross-cultural validity of impairment and activity limitation measures used in rehabilitation from the perspective of the Rasch measurement model. Cross-cultural validity is assessed through an analysis of Differential Item Functioning (DIF) within the context of additive conjoint measurement expressed through the Rasch model. Data from patients undergoing rehabilitation for stroke was provided from 62 centers across Europe. Two commonly used outcome measures, the Mini-Mental State Examination (MMSE) and the Functional Independence Measure (FIM) motor scale are used to illustrate the approach. Pooled data from 3 countries for the MMSE were shown to fit the Rasch model with only 1 item displaying DIF by country. In contrast, many items from the FIM expressed DIF and misfit to the model. Consequently they were allowed to be unique across countries, so resolving the lack of fit to the model. Where data are to be pooled for international studies, analysis of DIF by culture is essential. Where DIF is observed, adjustments can be made to allow for cultural differences in outcome measurement.

The QLDS: a scale for the measurement of quality of life in depression.

Glynnis Hunt,  Benjamin McKenna (1992)
It has been apparent for some time that utilisation of health services is more influenced by how people feel than by their 'objective' symptoms. Research has also shown that compliance with treatment regimens is dependent on the impact of that treatment on the patient's well-being. Such findings highlight the need to assess the patient's view of his or her progress through the health care system. This has led to a growing interest in quality of life assessment and, in particular, to the impact of illness and its treatment on the quality of life of the patient. Perhaps surprisingly, interest in quality of life measures for outcome assessment in Psychiatry has been slower to develop than in other specialties. While a number of clinician- and patient-completed measures of the severity of depressive symptoms exist, no measure of the quality of life of depressed patients is available. This paper describes the development and testing of the Quality of Life in Depression Scale (QLDS), a new measure designed to fill this gap. The theoretical basis for the instrument is that life gains its quality from the ability and capacity of the individual to satisfy his or her needs. The items included in the QLDS were derived from 30 qualitative interviews with depressed or recently recovered patients. Further interviews were held with depressed patients to establish the face and content validity of the instrument. Respondents had little trouble completing the questionnaire and found the content to be relevant to their experience of depression. The QLDS represents an important advance in our ability to understand the impact of depression on quality of life.

Importance of differentiating health status from quality of life.