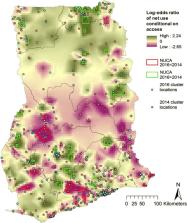 Insecticide-treated nets (ITNs) are one of the most effective and widely available methods for preventing malaria, and there is interest in understanding the complexities of behavioural drivers of non-use among those with access. This analysis evaluated net use behaviour in Ghana by exploring how several household and environmental variables relate to use among Ghanaians with access to a net.

Survey data from the Ghana 2014 Demographic and Health Survey and the 2016 Malaria Indicator Survey were used to calculate household members’ access to space under a net as well as the proportion of net use conditional on access (NUCA). Geospatial information on cluster location was obtained, as well as average humidex, a measure of how hot it feels, for the month each cluster was surveyed. The relationship between independent variables and net use was assessed via beta-binomial regression models that controlled for spatially correlated random effects using non-Gaussian kriging.

In both surveys, increasing wealth was associated with decreased net use among those with access in households when compared to the poorest category. In 2014, exposure to messages about bed net use for malaria prevention was associated with increased net use (OR 2.5, 95% CrI 1.5–4.2), as was living in a rural area in both 2014 (OR 2.5, 95% CrI 1.5–4.3) and 2016 (OR 1.6, 95% CrI 1.1–2.3). The number of nets per person was not associated with net use in either survey. Model fit was improved for both surveys by including a spatial random effect for cluster, demonstrating some spatial autocorrelation in the proportion of people using a net. Humidex, electricity in the household and IRS were not associated with NUCA.

Net use conditional on access is affected by household characteristics and is also spatially-dependent in Ghana. Setting (whether the household was urban or rural) plays a role, with wealthier and more urban households less likely to use nets when they are available. It will likely be necessary in the future to focus on rural settings, urban settings, and wealth status independently, both to better understand predictors of household net use in these areas and to design more targeted interventions to ensure consistent use of vector control interventions that meet specific needs of the population.

Reported reasons for not using a mosquito net when one is available: a review of the published literature

Justin Pulford,  Manuel W Hetzel,  Miranda Bryant … (2011)
Background A review of the barriers to mosquito net use in malaria-endemic countries has yet to be presented in the published literature despite considerable research interest in this area. This paper partly addresses this gap by reviewing one component of the evidence base; namely, published research pertaining to self-reported reasons for not using a mosquito net among net 'owning' individuals. It was anticipated that the review findings would potentially inform an intervention or range of interventions best suited to promoting greater net use amongst this group. Method Studies were sought via a search of the Medline database. The key inclusion criteria were: that study participants could be identified as owning a mosquito net or having a mosquito net available for use; that these participants on one or more occasions were identified or self-reported as not using the mosquito net; and that reasons for not using the mosquito net were reported. Studies meeting these criteria were included irrespective of mosquito net type. Results A total of 22 studies met the inclusion criteria. Discomfort, primarily due to heat, and perceived (low) mosquito density were the most widely identified reason for non-use. Social factors, such as sleeping elsewhere, or not sleeping at all, were also reported across studies as were technical factors related to mosquito net use (i.e. not being able to hang a mosquito net or finding it inconvenient to hang) and the temporary unavailability of a normally available mosquito net (primarily due to someone else using it). However, confidence in the reported findings was substantially undermined by a range of methodological limitations and a dearth of dedicated research investigation. Conclusions The findings of this review should be considered highly tentative until such time as greater quantities of dedicated, well-designed and reported studies are available in the published literature. The current evidence-base is not sufficient in scope or quality to reliably inform mosquito net promoting interventions or campaigns targeted at individuals who own, but do not (reliably) use, mosquito nets.

Lucy S Tusting,  Christian Bottomley,  Harry Gibson … (2017)
Background Improvements to housing may contribute to malaria control and elimination by reducing house entry by malaria vectors and thus exposure to biting. We tested the hypothesis that the odds of malaria infection are lower in modern, improved housing compared to traditional housing in sub-Saharan Africa (SSA). Methods and Findings We analysed 15 Demographic and Health Surveys (DHS) and 14 Malaria Indicator Surveys (MIS) conducted in 21 countries in SSA between 2008 and 2015 that measured malaria infection by microscopy or rapid diagnostic test (RDT). DHS/MIS surveys record whether houses are built with finished materials (e.g., metal) or rudimentary materials (e.g., thatch). This information was used to develop a binary housing quality variable where houses built using finished wall, roof, and floor materials were classified as “modern”, and all other houses were classified as “traditional”. Conditional logistic regression was used to determine the association between housing quality and prevalence of malaria infection in children aged 0–5 y, adjusting for age, gender, insecticide-treated net (ITN) use, indoor residual spraying, household wealth, and geographic cluster. Individual survey odds ratios (ORs) were combined to determine a summary OR using a random effects meta-analysis. Of 284,532 total children surveyed, 139,318 were tested for malaria infection using microscopy (n = 131,652) or RDT (n = 138,540). Within individual surveys, malaria prevalence measured by microscopy ranged from 0.4% (Madagascar 2011) to 45.5% (Burkina Faso 2010) among children living in modern houses and from 0.4% (The Gambia 2013) to 70.6% (Burkina Faso 2010) in traditional houses, and malaria prevalence measured by RDT ranged from 0.3% (Senegal 2013–2014) to 61.2% (Burkina Faso 2010) in modern houses and from 1.5% (The Gambia 2013) to 79.8% (Burkina Faso 2010) in traditional houses. Across all surveys, modern housing was associated with a 9% to 14% reduction in the odds of malaria infection (microscopy: adjusted OR 0.91, 95% CI 0.85–0.97, p = 0.003; RDT: adjusted OR 0.86, 95% CI 0.80–0.92, p < 0.001). This association was consistent regardless of ITN usage. As a comparison, the odds of malaria infection were 15% to 16% lower among ITN users versus non-users (microscopy: adjusted OR 0.84, 95% CI 0.79–0.90, p < 0.001; RDT: adjusted OR 0.85, 95% CI 0.80–0.90, p < 0.001). The main limitation of this study is that residual confounding by household wealth of the observed association between housing quality and malaria prevalence is possible, since the wealth index may not have fully captured differences in socioeconomic position; however, the use of multiple national surveys offers the advantage of a large sample size and the elimination of many biases typically associated with pooling observational data. Conclusions Housing quality is an important risk factor for malaria infection across the spectrum of malaria endemicity in SSA, with a strength of association between housing quality and malaria similar to that observed between ITN use and malaria. Improved housing should be considered a promising intervention for malaria control and elimination and long-term prevention of reintroduction.