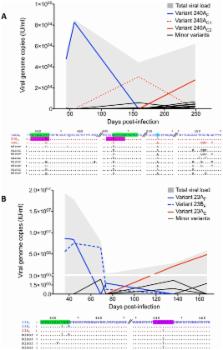 Hepatitis C is a pandemic human RNA virus, which commonly causes chronic infection and liver disease. The characterization of viral populations that successfully initiate infection, and also those that drive progression to chronicity is instrumental for understanding pathogenesis and vaccine design. A comprehensive and longitudinal analysis of the viral population was conducted in four subjects followed from very early acute infection to resolution of disease outcome. By means of next generation sequencing (NGS) and standard cloning/Sanger sequencing, genetic diversity and viral variants were quantified over the course of the infection at frequencies as low as 0.1%. Phylogenetic analysis of reassembled viral variants revealed acute infection was dominated by two sequential bottleneck events, irrespective of subsequent chronicity or clearance. The first bottleneck was associated with transmission, with one to two viral variants successfully establishing infection. The second occurred approximately 100 days post-infection, and was characterized by a decline in viral diversity. In the two subjects who developed chronic infection, this second bottleneck was followed by the emergence of a new viral population, which evolved from the founder variants via a selective sweep with fixation in a small number of mutated sites. The diversity at sites with non-synonymous mutation was higher in predicted cytotoxic T cell epitopes, suggesting immune-driven evolution. These results provide the first detailed analysis of early within-host evolution of HCV, indicating strong selective forces limit viral evolution in the acute phase of infection.

Primary hepatitis C (HCV) infection is typically asymptomatic and commonly results in persistent infection. The characteristics of early infection remain undefined. Four subjects were studied longitudinally from within a few weeks of transmission until resolution of outcome, via a full genome analysis of viral evolution. In the acute phase (<100 days post-infection) there were two periods with a major reduction in genetic diversity (i.e. a bottleneck) irrespective of subsequent clearance (n = 2) or chronic infection (n = 2). The first bottleneck was associated with transmission, with generally only one ‘founder’ virus successfully establishing infection. The second occurred following the primary peak in viraemia, concomitant with seroconversion, approximately 100 days post-infection. In the subjects who became chronically infected, the second bottleneck was followed by emergence of a new cluster of variants, which evolved from the founder(s), and carried only a small number of mutated residues that reached fixation. Some fixations occurred in known targets of CD8 cytotoxic T cell and neutralizing antibody responses. These results indicate a common evolutionary pattern, independent of disease outcome in the acute phase of HCV infection, with strong signatures of selective pressures driving the transition into chronic infection. These novel data will inform preventative vaccine strategies.

Nilu Goonetilleke,  Michael K.P. Liu,  Jesus Salazar-Gonzalez … (2009)
Identification of the transmitted/founder virus makes possible, for the first time, a genome-wide analysis of host immune responses against the infecting HIV-1 proteome. A complete dissection was made of the primary HIV-1–specific T cell response induced in three acutely infected patients. Cellular assays, together with new algorithms which identify sites of positive selection in the virus genome, showed that primary HIV-1–specific T cells rapidly select escape mutations concurrent with falling virus load in acute infection. Kinetic analysis and mathematical modeling of virus immune escape showed that the contribution of CD8 T cell–mediated killing of productively infected cells was earlier and much greater than previously recognized and that it contributed to the initial decline of plasma virus in acute infection. After virus escape, these first T cell responses often rapidly waned, leaving or being succeeded by T cell responses to epitopes which escaped more slowly or were invariant. These latter responses are likely to be important in maintaining the already established virus set point. In addition to mutations selected by T cells, there were other selected regions that accrued mutations more gradually but were not associated with a T cell response. These included clusters of mutations in envelope that were targeted by NAbs, a few isolated sites that reverted to the consensus sequence, and bystander mutations in linkage with T cell–driven escape.

Hepatitis C viral dynamics in vivo and the antiviral efficacy of interferon-alpha therapy.

David Gretch,  Alan Perelson,  Matthew T Wiley … (1998)
To better understand the dynamics of hepatitis C virus and the antiviral effect of interferon-alpha-2b (IFN), viral decline in 23 patients during therapy was analyzed with a mathematical model. The analysis indicates that the major initial effect of IFN is to block virion production or release, with blocking efficacies of 81, 95, and 96% for daily doses of 5, 10, and 15 million international units, respectively. The estimated virion half-life (t1/2) was, on average, 2.7 hours, with pretreatment production and clearance of 10(12) virions per day. The estimated infected cell death rate exhibited large interpatient variation (corresponding t1/2 = 1.7 to 70 days), was inversely correlated with baseline viral load, and was positively correlated with alanine aminotransferase levels. Fast death rates were predictive of virus being undetectable by polymerase chain reaction at 3 months. These findings show that infection with hepatitis C virus is highly dynamic and that early monitoring of viral load can help guide therapy.

The distribution of fitness effects caused by single-nucleotide substitutions in an RNA virus.

R. Sanjuán,  Andrés Moya,  S F Elena (2004)
Little is known about the mutational fitness effects associated with single-nucleotide substitutions on RNA viral genomes. Here, we used site-directed mutagenesis to create 91 single mutant clones of vesicular stomatitis virus derived from a common ancestral cDNA and performed competition experiments to measure the relative fitness of each mutant. The distribution of nonlethal deleterious effects was highly skewed and had a long, flat tail. As expected, fitness effects depended on whether mutations were chosen at random or reproduced previously described ones. The effect of random deleterious mutations was well described by a log-normal distribution, with -19% reduction of average fitness; the effects distribution of preobserved deleterious mutations was better explained by a beta model. The fit of both models was improved when combined with a uniform distribution. Up to 40% of random mutations were lethal. The proportion of beneficial mutations was unexpectedly high. Beneficial effects followed a gamma distribution, with expected fitness increases of 1% for random mutations and 5% for preobserved mutations.

¶ PAW and ARL are joint senior authors on this work.

Publisher ID: PPATHOGENS-D-11-00883
DOI: 10.1371/journal.ppat.1002243
PMC ID: 3164670
PubMed ID: 21912520
Copyright statement: Bull et al. This is an open-access article distributed under the terms of the Creative Commons Attribution License, which permits unrestricted use, distribution, and reproduction in any medium, provided the original author and source are credited.