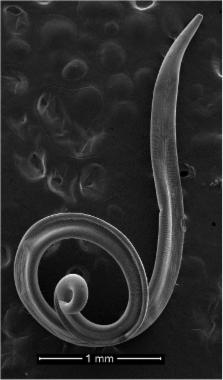 In the past decade, canine thelaziosis due to Thelazia callipaeda has been diagnosed in an increasing number of European countries, with endemic areas being identified. A multi-center field trial was conducted in endemic areas in France and Spain to evaluate the efficacy of monthly administrations of the oral milbemycin oxime/afoxolaner combination (NexGard Spectra ®) for the prevention of T. callipaeda infection in at-risk dogs. A total of 79 dogs negative for T. callipaeda and with a clinical history of eyeworm infection in the past two years completed the study. Dogs were randomly allocated either to a negative control group (42 dogs) or to the NexGard Spectra ® treated group (37 dogs). All dogs were followed up for a 6-month period and assessed monthly for the presence of nematodes on the eyes and for the signs of ocular thelaziosis (e.g., conjunctivitis, keratitis, and ocular discharge). When the presence of nematodes was confirmed, the conjunctival fornix was flushed with a saline solution for parasite recovery and counting, and the dogs were treated appropriately. Recovered parasites were stored in 70% alcohol for subsequent morphological identification. During the course of the study, 57.1% (24/42) of the control dogs were diagnosed positive for Thelazia infection, which illustrates a high incidence rate of parasite infection. Conversely, no eyeworm was recovered from any of the 37 dogs that received NexGard Spectra ®. All parasites sampled were confirmed to be T. callipaeda. This clinical field study demonstrated that monthly administrations of NexGard Spectra ® provided 100% preventive efficacy against canine thelaziosis.

Domenico Otranto,  Moreno Dutto (2008)
Thelazia callipaeda eyeworm is a nematode transmitted by drosophilid flies to carnivores in Europe. It has also been reported in the Far East in humans. We report T. callipaeda infection in 4 human patients in Italy and France.

Phortica variegata as an intermediate host of Thelazia callipaeda under natural conditions: evidence for pathogen transmission by a male arthropod vector.

Domenico Otranto,  G Testini,  R Lia … (2006)
Knowledge about Phortica variegata (Drosophilidae, Steganinae), the intermediate host of the eyeworm Thelazia callipaeda (Spirurida, Thelaziidae), is confined to experimental studies. To investigate the role P. variegata plays in the transmission of T. callipaeda under natural conditions, the population dynamics of these flies in the natural environment and their feeding preferences (on vegetables and/or animal lachrymal secretions) were examined. From April to November 2005, a total number of 969 (557 males and 412 females) P. variegata flies were collected weekly in a region of southern Italy with a history of canine thelaziosis. The flies were identified and dissected or subjected to a PCR assay specific for a region within the ribosomal ITS-1 DNA of T. callipaeda. The zoophilic preferences of P. variegata were assessed by collecting flies around the eyes of a person or around a fruit bait. Seven hundred and twenty flies (398 males and 322 females) were dissected under a stereomicroscope; 249 flies (158 males and 91 females) that died prior to the dissection were subjected to molecular investigation. Only P. variegata males were infected with larval T. callipaeda both at dissection (six, 0.83%) and with the specific PCR (seven, 2.81%), representing a total percentage of 1.34% flies infected. Interestingly, only males were collected around the eyes, compared with a male/female ratio of 1:4 around the fruit. This survey indicated that P. variegata males act as intermediate hosts of T. callipaeda under natural conditions in Europe. Both the zoophilic behaviour of P. variegata males on lachrymal secretions and their role as vector of T. callipaeda have been discussed as they represent a peculiarity in medical and veterinary entomology. The synchrony between the fly population dynamics and the biology of the nematode in the definitive host provides an interesting model for exploring the co-evolution of Thelazia spp. with their hosts.

E Brianti,  J Maca,  Domenico Otranto … (2006)
Flies belonging to the subfamily Steganinae (Drosophilidae) display unusual zoophilic feeding habits at the adult and/or larval stage. Phortica variegata (Fallén) feeds on tears or eye liquid around the eyes of humans and carnivores. When feeding it is a potential vector of Thelazia callipaeda (Railliet and Henry) eyeworms. Adult and larval stages of this fly may be easily confused with other species belonging to the same genus, and little is known on the biology and ecology of P. variegata. In April-November 2005, a total of 969 P. variegata were collected in an area with a high prevalence of canine thelaziosis. The number of flies collected weekly was then related to climatic and environmental parameters (e.g. temperature, relative humidity and total rainfall) recorded daily at the collection site. The highest number of Phortica were collected during July-August. The sex ratio (number of males : females) rose from approximately 0.5 during May-July, to approximately 3.0 in August and 181 during September-October. Distributional data, representing 242 sites at which P. variegata has been collected in Europe, were analysed using a desktop implementation of the genetic algorithm for rule-set prediction (GARP) to model ecological requirements across Europe, as well as in Italy. P. variegata is shown to be mainly active at 20-25 degrees C and 50-75% RH. The ecological niche model suggests with a high degree of confidence that large areas of Europe are likely to represent suitable habitat for this species, mostly concentrated in central Europe. The results reported here contribute basic knowledge on the ecology and geographical distribution of P. variegata flies, which will be fundamental to gaining a better understanding of their role as vectors of human and animal pathogens.