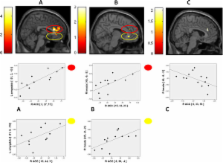 Premenstrual dysphoric disorder (PMDD), characterized by luteal phase-induced negative affect and loss of impulse control, often results in compromised social interactions. Although amygdala activation is generally linked to negative affect, increased amygdala reactivity to aversive stimuli in the luteal phase has not been consistently reported in PMDD. We tested the hypothesis that amygdala hyper-reactivity in PMDD is symptom specific, rather than generalized, and linked to socially relevant stimuli. Blood oxygenation level dependent signal changes during exposure to negative images with social and non-social content were evaluated in the mid-follicular and late luteal phase of the menstrual cycle. Fourteen women with PMDD and 13 healthy controls participated.

G.L. Posner,  Shelly Luu,  MR Posner … (2000)
Anterior cingulate cortex (ACC) is a part of the brain's limbic system. Classically, this region has been related to affect, on the basis of lesion studies in humans and in animals. In the late 1980s, neuroimaging research indicated that ACC was active in many studies of cognition. The findings from EEG studies of a focal area of negativity in scalp electrodes following an error response led to the idea that ACC might be the brain's error detection and correction device. In this article, these various findings are reviewed in relation to the idea that ACC is a part of a circuit involved in a form of attention that serves to regulate both cognitive and emotional processing. Neuroimaging studies showing that separate areas of ACC are involved in cognition and emotion are discussed and related to results showing that the error negativity is influenced by affect and motivation. In addition, the development of the emotional and cognitive roles of ACC are discussed, and how the success of this regulation in controlling responses might be correlated with cingulate size. Finally, some theories are considered about how the different subdivisions of ACC might interact with other cortical structures as a part of the circuits involved in the regulation of mental and emotional activity.

Serotonin transporter genetic variation and the response of the human amygdala.

B Kolachana,  Venkata S. Mattay,  Francesco Fera … (2002)
A functional polymorphism in the promoter region of the human serotonin transporter gene (SLC6A4) has been associated with several dimensions of neuroticism and psychopathology, especially anxiety traits, but the predictive value of this genotype against these complex behaviors has been inconsistent. Serotonin [5- hydroxytryptamine, (5-HT)] function influences normal fear as well as pathological anxiety, behaviors critically dependent on the amygdala in animal models and in clinical studies. We now report that individuals with one or two copies of the short allele of the serotonin transporter (5-HTT) promoter polymorphism, which has been associated with reduced 5-HTT expression and function and increased fear and anxiety-related behaviors, exhibit greater amygdala neuronal activity, as assessed by BOLD functional magnetic resonance imaging, in response to fearful stimuli compared with individuals homozygous for the long allele. These results demonstrate genetically driven variation in the response of brain regions underlying human emotional behavior and suggest that differential excitability of the amygdala to emotional stimuli may contribute to the increased fear and anxiety typically associated with the short SLC6A4 allele.

An insular view of anxiety.

Adam B. Stein,  John R. Stein,  Martin Paulus (2006)
We propose a general hypothesis that integrates affective and cognitive processing with neuroanatomy to explain anxiety pronenes. The premise is that individuals who are prone to anxiety show an altered interoceptive prediction signal, i.e., manifest augmented detection of the difference between the observed and expected body state. As a consequence, the increased prediction signal of a prospective aversive body state triggers an increase in anxious affect, worrisome thoughts and other avoidance behaviors. The anterior insula is proposed to play a key role in this process. Further testing of this model--which should include investigation of genetic and environmental influences--may lead to the development of novel treatments that attenuate this altered interoceptive prediction signal in patients with anxiety disorders.