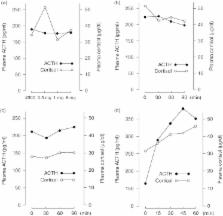 Berenice Mendonca,  Gérzia Machado,  Sorahia Domenice … (2006)
Ectopic ACTH syndrome (EAS) occurs in about 5-10% of all patients with ACTH-dependent hypercortisolism with most of them caused by intrathoracic neoplasms. It may be associated with overt malignancies or with occult and indolent tumors. We assessed the accuracy of dynamic tests, inferior petrosal sinus sampling (IPSS) using desmopressin, and imaging in the work-up diagnosis of EAS. Tumor markers, imaging, and outcome data from 25 patients (13F/12M) aged 18-72 years. High dexamethasone suppression test (HDDST), desmopressin test, GHRP-6 test, corticotropin-releasing hormone (CRH) test, IPSS, computed tomography (CT), magnetic resonance imaging (MRI), and (111)In-pentetreotide scintigraphy were revised. In 5 out of 20 patients HDDST was positive. In 13 patients who underwent desmopressin test, ACTH- and cortisol-positive responses were seen in six and five patients respectively. GHRP-6 test was positive in two out of three cases. Two patients underwent CRH test with negative response. In the seven patients submitted to IPSS using desmopressin in six of them, none had ACTH gradients. CT was positive in 15 out of 21 patients and MRI in 8 out of 17 cases. (111)In-pentetreotide scintigraphy was positive in three out of five patients. Fourteen patients had intrathoracic tumors, five had pheochromocytomas, three had pancreatic tumors, one had a glomic tumor, and had three occult tumors. Six out of 11 patients with metastasis died and 3 others without metastasis died. IPSS with desmopressin was helpful for differential diagnosis. Patients initially harboring occult carcinoids may also exhibit severe hypercortisolism and those harboring tymic carcinoids had poor prognoses when compared with bronchial carcinoids and pheocromocytomas.

Henrica de Vet,  Richard Feelders,  L Hofland (2009)
Cushing's syndrome is associated with serious morbidity and increased mortality. Irrespective of its cause, i.e. a pituitary adenoma, ectopic ACTH production or an adrenal neoplasia, Cushing's syndrome is primarily treated surgically. However, when surgery is unsuccessful or contraindicated, medical therapy is needed to treat hypercortisolism. The spectrum of available drugs includes adrenal-blocking agents, neuromodulatory drugs and glucocorticoid receptor antagonists. Adrenal blocking drugs suppress adrenal cortisol production via inhibition of steroidogenic enzymes. Ketoconazole and metyrapone are most frequently used for this purpose, but chronic treatment with these drugs can be limited by side effects like hepatotoxicity (ketoconazole) and increased androgen and mineralocorticoid production (metyrapone). Etomidate can be used to rapidly reverse cortisol excess in patients with acute complications of (severe) hypercortisolism like psychosis. In Cushing's disease, combination therapy with drugs that target the corticotropic adenoma, i.e. the universal somatostatin analogue pasireotide and/or the dopamine agonist cabergoline, and low-dose ketoconazole seems a rational approach to achieve biochemical control. Copyright © 2010 S. Karger AG, Basel.

Drugs in the medical treatment of Cushing's syndrome.

D Schteingart (2009)
Cushing's syndrome is a complex endocrine condition with potential serious complications if untreated or inadequately treated. Transsphenoidal surgery with resection of a pituitary adenoma is successful in 75 - 80% of patients, but approximately 20 - 25% show persistence of Cushing's, and a similar proportion may experience recurrence within 2 - 4 years post-op. When surgery fails, medical treatment can temporarily suppress excessive cortisol production and ameliorate its clinical manifestations while more definitive therapy becomes effective. We describe pharmacological approaches to the treatment of Cushing's syndrome. Drugs used to suppress cortisol secretion are mostly inhibitors of steroidogenesis. Ketoconazole, fluconazole aminoglutethimide, metyrapone, mitotane and etomidate are in that category. Ketoconazole is in current use while other drugs, although mostly available in the past, continue to have a potential role either alone or in combination. Drugs that suppress adrenocorticotropic hormone (ACTH) secretion are less popular as standard treatment and include cyproheptadine, valproic acid, cabergoline, somatostatin analogs, PPAR-gamma agonists, vasopressin antagonists. Some of these drugs have been tested in limited clinical trials but there is potential therapeutic benefit in analogs with better specificity for the class of receptors present in ACTH-secreting tumors. A third category of drugs is glucocorticoid receptor antagonists. Mifepristone is currently being tested in clinical trials in patients with persistent or recurrent Cushing's disease and in patients with metastatic adrenal cortical carcinoma or ectopic ACTH syndrome not amenable to surgery. We also review replacement therapy after surgery and non-specific drugs to treat complications in patients with severe hypercortisol. The review provides a complete survey of the drugs used in the medical treatment of Cushing's, and new advances in the development of pituitary-active drugs as well as receptor blockers of glucocorticoid action. It also provides avenues for exploration of new drugs active on somatostatin, dopamine and vasopressin receptors. There are effective pharmacological agents capable of chronically reversing biochemical and clinical manifestations of hypercortisolemia in Cushing's syndrome but new drugs are needed with action at the pituitary level.

Correspondence should be addressed to K Kageyama Email: kkageyama@ 123456hkg.odn.ne.jp