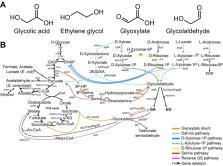 Glycolic acid (GA) and ethylene glycol (EG) are versatile two-carbon organic chemicals used in multiple daily applications. GA and EG are currently produced by chemical synthesis, but their biotechnological production from renewable resources has received a substantial interest. Several different metabolic pathways by using genetically modified microorganisms, such as Escherichia coli, Corynebacterium glutamicum and yeast have been established for their production. As a result, the yield of GA and EG produced from sugars has been significantly improved. Here, we describe the recent advancement in metabolic engineering efforts focusing on metabolic pathways and engineering strategies used for GA and EG production.

Genetic analysis of a novel pathway for D-xylose metabolism in Caulobacter crescentus.

Production of glycolic acid by chemolithotrophic iron- and sulfur-oxidizing bacteria and its role in delineating and sustaining acidophilic sulfide mineral-oxidizing consortia.

Ivan Nancucheo,  Matthew D. Johnson (2009)
Glycolic acid was detected as an exudate in actively growing cultures of three chemolithotrophic acidophiles that are important in biomining operations, Leptospirillum ferriphilum, Acidithiobacillus (At.) ferrooxidans, and At. caldus. Although similar concentrations of glycolic acid were found in all cases, the concentrations corresponded to ca. 24% of the total dissolved organic carbon (DOC) in cultures of L. ferriphilum but only ca. 5% of the total DOC in cultures of the two Acidithiobacillus spp. Rapid acidification (to pH 1.0) of the culture medium of At. caldus resulted in a large increase in the level of DOC, although the concentration of glycolic acid did not change in proportion. The archaeon Ferroplasma acidiphilum grew in the cell-free spent medium of At. caldus; glycolic acid was not metabolized, although other unidentified compounds in the DOC pool were metabolized. Glycolic acid exhibited levels of toxicity with 21 strains of acidophiles screened similar to those of acetic acid. The most sensitive species were chemolithotrophs (L. ferriphilum and At. ferrivorans), while the most tolerant species were chemoorganotrophs (Acidocella, Acidobacterium, and Ferroplasma species), and the ability to metabolize glycolic acid appeared to be restricted (among acidophiles) to Firmicutes (chiefly Sulfobacillus spp.). Results of this study help explain why Sulfobacillus spp. rather than other acidophiles are the main organic carbon-degrading bacteria in continuously fed stirred tanks used to bioprocess sulfide mineral concentrates and also why temporary cessation of pH control in these systems, resulting in rapid acidification, often results in a plume of the archaeon Ferroplasma.