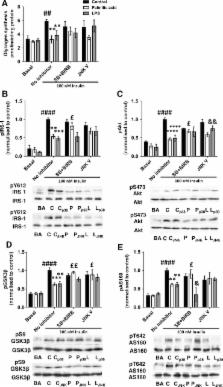 Obesity and saturated fatty acid (SFA) treatment are both associated with skeletal muscle insulin resistance (IR) and increased macrophage infiltration. However, the relative effects of SFA and unsaturated fatty acid (UFA)-activated macrophages on muscle are unknown. Here, macrophages were treated with palmitic acid, palmitoleic acid or both and the effects of the conditioned medium (CM) on C2C12 myotubes investigated. CM from palmitic acid-treated J774s (palm-mac-CM) impaired insulin signalling and insulin-stimulated glycogen synthesis, reduced Inhibitor κBα and increased phosphorylation of p38 mitogen-activated protein kinase (MAPK) and c-Jun N-terminal kinase in myotubes. p38 MAPK inhibition or siRNA partially ameliorated these defects, as did addition of tumour necrosis factor-α blocking antibody to the CM. Macrophages incubated with both FAs generated CM that did not induce IR, while palmitoleic acid-mac-CM alone was insulin sensitising. Thus UFAs may improve muscle insulin sensitivity and counteract SFA-mediated IR through an effect on macrophage activation.

Obesity is associated with macrophage accumulation in adipose tissue.

Carey Lumeng,  Alan Saltiel,  Jennifer Bodzin (2006)
Adipose tissue macrophages (ATMs) infiltrate adipose tissue during obesity and contribute to insulin resistance. We hypothesized that macrophages migrating to adipose tissue upon high-fat feeding may differ from those that reside there under normal diet conditions. To this end, we found a novel F4/80(+)CD11c(+) population of ATMs in adipose tissue of obese mice that was not seen in lean mice. ATMs from lean mice expressed many genes characteristic of M2 or "alternatively activated" macrophages, including Ym1, arginase 1, and Il10. Diet-induced obesity decreased expression of these genes in ATMs while increasing expression of genes such as those encoding TNF-alpha and iNOS that are characteristic of M1 or "classically activated" macrophages. Interestingly, ATMs from obese C-C motif chemokine receptor 2-KO (Ccr2-KO) mice express M2 markers at levels similar to those from lean mice. The antiinflammatory cytokine IL-10, which was overexpressed in ATMs from lean mice, protected adipocytes from TNF-alpha-induced insulin resistance. Thus, diet-induced obesity leads to a shift in the activation state of ATMs from an M2-polarized state in lean animals that may protect adipocytes from inflammation to an M1 proinflammatory state that contributes to insulin resistance.

Henry H. Yin,  Jeffrey Flier,  Maia V Kokoeva … (2006)
TLR4 is the receptor for LPS and plays a critical role in innate immunity. Stimulation of TLR4 activates proinflammatory pathways and induces cytokine expression in a variety of cell types. Inflammatory pathways are activated in tissues of obese animals and humans and play an important role in obesity-associated insulin resistance. Here we show that nutritional fatty acids, whose circulating levels are often increased in obesity, activate TLR4 signaling in adipocytes and macrophages and that the capacity of fatty acids to induce inflammatory signaling in adipose cells or tissue and macrophages is blunted in the absence of TLR4. Moreover, mice lacking TLR4 are substantially protected from the ability of systemic lipid infusion to (a) suppress insulin signaling in muscle and (b) reduce insulin-mediated changes in systemic glucose metabolism. Finally, female C57BL/6 mice lacking TLR4 have increased obesity but are partially protected against high fat diet-induced insulin resistance, possibly due to reduced inflammatory gene expression in liver and fat. Taken together, these data suggest that TLR4 is a molecular link among nutrition, lipids, and inflammation and that the innate immune system participates in the regulation of energy balance and insulin resistance in response to changes in the nutritional environment.