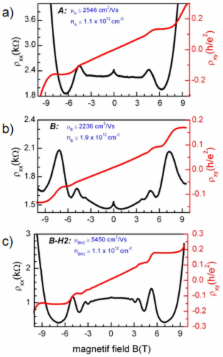 We investigate the magneto-transport properties of epitaxial graphene single-layer on 4H-SiC(0001), grown by atmospheric pressure graphitization in Ar, followed by H 2 intercalation. We directly demonstrate the importance of saturating the Si dangling bonds at the graphene/SiC(0001) interface to achieve high carrier mobility. Upon successful Si dangling bonds elimination, carrier mobility increases from 3 000 cm 2V −1s −1 to >11 000 cm 2V −1s −1 at 0.3 K. Additionally, graphene electron concentration tends to decrease from a few 10 12 cm −2 to less than 10 12 cm −2. For a typical large (30 × 280 μm 2) Hall bar, we report the observation of the integer quantum Hall states at 0.3 K with well developed transversal resistance plateaus at Landau level filling factors of ν = 2, 6, 10, 14… 42 and Shubnikov de Haas oscillation of the longitudinal resistivity observed from about 1 T. In such a device, the Hall state quantization at ν = 2, at 19 T and 0.3 K, can be very robust: the dissipation in electronic transport can stay very low, with the longitudinal resistivity lower than 5 mΩ, for measurement currents as high as 250 μA. This is very promising in the view of an application in metrology.

Kendra K. Schmid,  Aaron Bostwick,  Jessica McChesney … (2009)
Graphene, a single monolayer of graphite, has recently attracted considerable interest owing to its novel magneto-transport properties, high carrier mobility and ballistic transport up to room temperature. It has the potential for technological applications as a successor of silicon in the post Moore's law era, as a single-molecule gas sensor, in spintronics, in quantum computing or as a terahertz oscillator. For such applications, uniform ordered growth of graphene on an insulating substrate is necessary. The growth of graphene on insulating silicon carbide (SiC) surfaces by high-temperature annealing in vacuum was previously proposed to open a route for large-scale production of graphene-based devices. However, vacuum decomposition of SiC yields graphene layers with small grains (30-200 nm; refs 14-16). Here, we show that the ex situ graphitization of Si-terminated SiC(0001) in an argon atmosphere of about 1 bar produces monolayer graphene films with much larger domain sizes than previously attainable. Raman spectroscopy and Hall measurements confirm the improved quality of the films thus obtained. High electronic mobilities were found, which reach mu=2,000 cm (2) V(-1) s(-1) at T=27 K. The new growth process introduced here establishes a method for the synthesis of graphene films on a technologically viable basis.

Susan E. McCann,  K Kechedzhi,  T Ando … (2006)
Because of the chiral nature of electrons in a monolayer of graphite (graphene) one can expect weak antilocalization and a positive weak-field magnetoresistance in it. However, trigonal warping (which breaks p-->-p symmetry of the Fermi line in each valley) suppresses antilocalization, while intervalley scattering due to atomically sharp scatterers in a realistic graphene sheet or by edges in a narrow wire tends to restore conventional negative magnetoresistance. We show this by evaluating the dependence of the magnetoresistance of graphene on relaxation rates associated with various possible ways of breaking a "hidden" valley symmetry of the system.

C. Riedl,  C Coletti,  T Iwasaki … (2009)
Quasi-free-standing epitaxial graphene is obtained on SiC(0001) by hydrogen intercalation. The hydrogen moves between the (6 square root(3) x 6 square root(3))R30 degrees reconstructed initial carbon layer and the SiC substrate. The topmost Si atoms which for epitaxial graphene are covalently bound to this buffer layer, are now saturated by hydrogen bonds. The buffer layer is turned into a quasi-free-standing graphene monolayer with its typical linear pi bands. Similarly, epitaxial monolayer graphene turns into a decoupled bilayer. The intercalation is stable in air and can be reversed by annealing to around 900 degrees C.