Brain–gut–adipose-tissue communication pathways at a glance 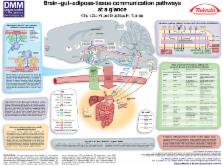 Publisher: The Company of Biologists Limited

One of the ‘side effects’ of our modern lifestyle is a range of metabolic diseases: the incidence of obesity, type 2 diabetes and associated cardiovascular diseases has grown to pandemic proportions. This increase, which shows no sign of reversing course, has occurred despite education and new treatment options, and is largely due to a lack of knowledge about the precise pathology and etiology of metabolic disorders. Accumulating evidence suggests that the communication pathways linking the brain, gut and adipose tissue might be promising intervention points for metabolic disorders. To maintain energy homeostasis, the brain must tightly monitor the peripheral energy state. This monitoring is also extremely important for the brain’s survival, because the brain does not store energy but depends solely on a continuous supply of nutrients from the general circulation. Two major groups of metabolic inputs inform the brain about the peripheral energy state: short-term signals produced by the gut system and long-term signals produced by adipose tissue. After central integration of these inputs, the brain generates neuronal and hormonal outputs to balance energy intake with expenditure.

Miscommunication between the gut, brain and adipose tissue, or the degradation of input signals once inside the brain, lead to the brain misunderstanding the peripheral energy state. Under certain circumstances, the brain responds to this miscommunication by increasing energy intake and production, eventually causing metabolic disorders. This poster article overviews current knowledge about communication pathways between the brain, gut and adipose tissue, and discusses potential research directions that might lead to a better understanding of the mechanisms underlying metabolic disorders.

Silvana Obici,  Lydia Aguilar-Bryan,  Luciano Rossetti … (2005)
Obesity is the driving force behind the worldwide increase in the prevalence of type 2 diabetes mellitus. Hyperglycaemia is a hallmark of diabetes and is largely due to increased hepatic gluconeogenesis. The medial hypothalamus is a major integrator of nutritional and hormonal signals, which play pivotal roles not only in the regulation of energy balance but also in the modulation of liver glucose output. Bidirectional changes in hypothalamic insulin signalling therefore result in parallel changes in both energy balance and glucose metabolism. Here we show that activation of ATP-sensitive potassium (K(ATP)) channels in the mediobasal hypothalamus is sufficient to lower blood glucose levels through inhibition of hepatic gluconeogenesis. Finally, the infusion of a K(ATP) blocker within the mediobasal hypothalamus, or the surgical resection of the hepatic branch of the vagus nerve, negates the effects of central insulin and halves the effects of systemic insulin on hepatic glucose production. Consistent with these results, mice lacking the SUR1 subunit of the K(ATP) channel are resistant to the inhibitory action of insulin on gluconeogenesis. These findings suggest that activation of hypothalamic K(ATP) channels normally restrains hepatic gluconeogenesis, and that any alteration within this central nervous system/liver circuit can contribute to diabetic hyperglycaemia.

Hypothalamic insulin signaling is required for inhibition of glucose production.

Jesús Argente,  M. H. Tschöp,  Lauren Cowley … (2010)
The neuronal circuits involved in the regulation of feeding behavior and energy expenditure are soft-wired, reflecting the relative activity of the postsynaptic neuronal system, including the anorexigenic proopiomelanocortin (POMC)-expressing cells of the arcuate nucleus. We analyzed the synaptic input organization of the melanocortin system in lean rats that were vulnerable (DIO) or resistant (DR) to diet-induced obesity. We found a distinct difference in the quantitative and qualitative synaptology of POMC cells between DIO and DR animals, with a significantly greater number of inhibitory inputs in the POMC neurons in DIO rats compared with DR rats. When exposed to a high-fat diet (HFD), the POMC cells of DIO animals lost synapses, whereas those of DR rats recruited connections. In both DIO rats and mice, the HFD-triggered loss of synapses on POMC neurons was associated with increased glial ensheathment of the POMC perikarya. The altered synaptic organization of HFD-fed animals promoted increased POMC tone and a decrease in the stimulatory connections onto the neighboring neuropeptide Y (NPY) cells. Exposure to HFD was associated with reactive gliosis, and this affected the structure of the blood-brain barrier such that the POMC and NPY cell bodies and dendrites became less accessible to blood vessels. Taken together, these data suggest that consumption of an HFD has a major impact on the cytoarchitecture of the arcuate nucleus in vulnerable subjects, with changes that might be irreversible due to reactive gliosis.

This is an Open Access article distributed under the terms of the Creative Commons Attribution Non-Commercial Share Alike License ( http://creativecommons.org/licenses/by-nc-sa/3.0), which permits unrestricted non-commercial use, distribution and reproduction in any medium provided that the original work is properly cited and all further distributions of the work or adaptation are subject to the same Creative Commons License terms.