Intrusive memories to traumatic footage: the neural basis of their encoding and involuntary recall 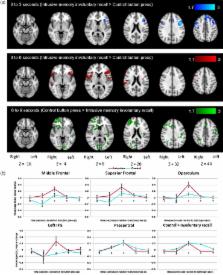 We found a widespread pattern of increased activation for Intrusive v. both Potential and Control scenes at encoding. The left inferior frontal gyrus and middle temporal gyrus showed increased activity in Intrusive scenes compared with Potential scenes, but not in Intrusive scenes compared with Control scenes. This pattern of activation persisted when taking recognition memory performance into account. Intrusive memory involuntary recall was characterized by activity in frontal regions, notably the left inferior frontal gyrus.

The left inferior frontal gyrus may be implicated in both the encoding and involuntary recall of intrusive memories.

M Vigneau, V Beaucousin, P Hervé … (2006)
The advent of functional neuroimaging has allowed tremendous advances in our understanding of brain-language relationships, in addition to generating substantial empirical data on this subject in the form of thousands of activation peak coordinates reported in a decade of language studies. We performed a large-scale meta-analysis of this literature, aimed at defining the composition of the phonological, semantic, and sentence processing networks in the frontal, temporal, and inferior parietal regions of the left cerebral hemisphere. For each of these language components, activation peaks issued from relevant component-specific contrasts were submitted to a spatial clustering algorithm, which gathered activation peaks on the basis of their relative distance in the MNI space. From a sample of 730 activation peaks extracted from 129 scientific reports selected among 260, we isolated 30 activation clusters, defining the functional fields constituting three distributed networks of frontal and temporal areas and revealing the functional organization of the left hemisphere for language. The functional role of each activation cluster is discussed based on the nature of the tasks in which it was involved. This meta-analysis sheds light on several contemporary issues, notably on the fine-scale functional architecture of the inferior frontal gyrus for phonological and semantic processing, the evidence for an elementary audio-motor loop involved in both comprehension and production of syllables including the primary auditory areas and the motor mouth area, evidence of areas of overlap between phonological and semantic processing, in particular at the location of the selective human voice area that was the seat of partial overlap of the three language components, the evidence of a cortical area in the pars opercularis of the inferior frontal gyrus dedicated to syntactic processing and in the posterior part of the superior temporal gyrus a region selectively activated by sentence and text processing, and the hypothesis that different working memory perception-actions loops are identifiable for the different language components. These results argue for large-scale architecture networks rather than modular organization of language in the left hemisphere.

Scott L Rauch, Lisa Shin, Elizabeth A Phelps (2006)
The prevailing neurocircuitry models of anxiety disorders have been amygdalocentric in form. The bases for such models have progressed from theoretical considerations, extrapolated from research in animals, to in vivo human imaging data. For example, one current model of posttraumatic stress disorder (PTSD) has been highly influenced by knowledge from rodent fear conditioning research. Given the phenomenological parallels between fear conditioning and the pathogenesis of PTSD, we have proposed that PTSD is characterized by exaggerated amygdala responses (subserving exaggerated acquisition of fear associations and expression of fear responses) and deficient frontal cortical function (mediating deficits in extinction and the capacity to suppress attention/response to trauma-related stimuli), as well as deficient hippocampal function (mediating deficits in appreciation of safe contexts and explicit learning/memory). Neuroimaging studies have yielded convergent findings in support of this model. However, to date, neuroimaging investigations of PTSD have not principally employed conditioning and extinction paradigms per se. The recent development of such imaging probes now sets the stage for directly testing hypotheses regarding the neural substrates of fear conditioning and extinction abnormalities in PTSD.

Predictors of posttraumatic stress disorder and symptoms in adults: a meta-analysis.

Emily Ozer, Suzanne R. Best, Tami L Lipsey … (2003)
A review of 2,647 studies of posttraumatic stress disorder (PTSD) yielded 476 potential candidates for a meta-analysis of predictors of PTSD or of its symptoms. From these, 68 studies met criteria for inclusion in a meta-analysis of 7 predictors: (a) prior trauma, (b) prior psychological adjustment, (c) family history of psychopathology, (d) perceived life threat during the trauma, (e) posttrauma social support, (f) peritraumatic emotional responses, and (g) peritraumatic dissociation. All yielded significant effect sizes, with family history, prior trauma, and prior adjustment the smallest (weighted r = .17) and peritraumatic dissociation the largest (weighted r = .35). The results suggest that peritraumatic psychological processes, not prior characteristics, are the strongest predictors of PTSD.

This is an Open Access article, distributed under the terms of the Creative Commons Attribution licence ( http://creativecommons.org/licenses/by/4.0/), which permits unrestricted re-use, distribution, and reproduction in any medium, provided the original work is properly cited.