Thyroid hormones in the regulation of brown adipose tissue thermogenesis 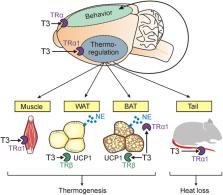 A normal thyroid status is crucial for body temperature homeostasis, as thyroid hormone regulates both heat loss and conservation as well as heat production in the thermogenic tissues. Brown adipose tissue (BAT) is the major site of non-shivering thermogenesis and an important target of thyroid hormone action. Thyroid hormone not only regulates the tissue’s sensitivity to sympathetic stimulation by norepinephrine but also the expression of uncoupling protein 1, the key driver of BAT thermogenesis. Vice versa, sympathetic stimulation of BAT triggers the expression of deiodinase type II, an enzyme that enhances local thyroid hormone availability and signaling. This review summarizes the current knowledge on how thyroid hormone controls BAT thermogenesis, aiming to dissect the direct actions of the hormone in BAT and its indirect actions via the CNS, browning of white adipose tissue or heat loss over body surfaces. Of particular relevance is the apparent dose dependency of the observed effects, as we find that minor or moderate changes in thyroid hormone levels often have different effects as compared to high pharmacological doses. Moreover, we conclude that the more recent findings require a reevaluation of older studies, as key aspects such as heat loss or central BAT activation may not have received the necessary attention during the interpretation of these early findings. Finally, we provide a list of what we believe are the most relevant questions in the field that to date are still enigmatic and require further studies.

Paul Yen (2001)
Thyroid hormones (THs) play critical roles in the differentiation, growth, metabolism, and physiological function of virtually all tissues. TH binds to receptors that are ligand-regulatable transcription factors belonging to the nuclear hormone receptor superfamily. Tremendous progress has been made recently in our understanding of the molecular mechanisms that underlie TH action. In this review, we present the major advances in our knowledge of the molecular mechanisms of TH action and their implications for TH action in specific tissues, resistance to thyroid hormone syndrome, and genetically engineered mouse models.