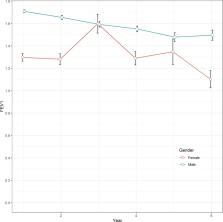 The prevalence of chronic obstructive pulmonary disease (COPD) in females has increased, changing the concept of COPD as a disease mostly limited to males. In this study, the clinical characteristics of COPD in females were investigated.

The study was based on a multicenter cohort of COPD patients recruited from 54 medical centers in South Korea. Sex-based differences in general characteristics, exposure risk factors, depression scores, results of pulmonary function tests, COPD exacerbation, symptom scores, and radiologic findings were evaluated. Sex-related differences in the annual FEV 1 change over 5 years were analyzed in a linear mixed model.

Of the 2515 patients enrolled in this study, 8.1% were female. Female patients who had a higher BMI and a lower level of education were less likely to be smokers, were more exposed to passive smoking/biomass, and were more depressed compared to males. The rates of bronchiectasis, previous childhood respiratory infection, and asthma were higher in females. Female patients also had more symptoms and a poorer exercise capacity than males, but no significant differences were observed in terms of exacerbations. Radiologic findings revealed that male patients had worse emphysema, and female patients had worse bronchiectasis, as determined based on chest X-ray and computed tomography findings. On pulmonary function tests, female patients had less obstruction and less annual FEV 1 loss over 5 years.

Anxiety and depression in COPD patients: The roles of gender and disease severity.

Stefano Centanni,  Francesco Blasi,  M Verga … (2006)
The aim of our study was to assess the prevalence of anxiety and depression in the whole chronic obstructive pulmonary disease (COPD) population and in subgroups according to sex and severity classification. A secondary objective was to evaluate the possible differences between patients with and without a significant high level of anxiety, depression, or both, and finally to find out a correlation between psychological aspects, symptoms, functional parameters, and quality of life (QoL). Two hundred and two COPD patients were enrolled. Their levels of anxiety, depression, dyspnea, and QoL were assessed using specific questionnaires. One hundred and fourteen sex- and age-matched healthy subjects were used as the control population. The prevalences of anxiety and depression were high (28.2% and 18.8%) in COPD even when it was of mild degree, compared to the control group, in which the prevalence of anxiety and depression were 6.1% and 3.5%, respectively. Female patients had higher levels of anxiety and depression and worse symptom-related QoL. Female patients reported a higher level of dyspnea than males for the same level of ventilatory impairment. Dyspnea was more strongly correlated with depression in women than in men. Anxiety and depressive symptoms are common in patients affected by COPD, even when their disease is mild in terms of FEV1 and respiratory symptoms. Female patients appear to be more exposed to psychological impairment, which correlates well with some specific symptomatic aspects of the disease, such as dyspnea. Psychological aspects need to be carefully assessed in COPD patients, particularly in females.

Gonzalo Valdivia,  Ana Menezes,  Rogelio Perez-Padilla … (2005)
Both the prevalence and mortality attributable to chronic obstructive pulmonary disease (COPD) seem to be increasing in low-income and middle-income countries, but few data are available. The aim of the PLATINO study, launched in 2002, was to describe the epidemiology of COPD in five major Latin American cities: São Paulo (Brazil), Santiago (Chile), Mexico City (Mexico), Montevideo (Uruguay), and Caracas (Venezuela). A two-stage sampling strategy was used in the five areas to obtain probability samples of adults aged 40 years or older. These individuals were invited to answer a questionnaire and undergo anthropometry, followed by prebronchodilator and postbronchodilator spirometry. We defined COPD as a ratio less than 0.7 of postbronchodilator forced expiratory volume in the first second over forced vital capacity. Complete information, including spirometry, was obtained from 963 people in São Paulo, 1173 in Santiago, 1000 in Mexico City, 885 in Montevideo, and 1294 in Caracas. Crude rates of COPD ranged from 7.8% (78 of 1000; 95% CI 5.9-9.7) in Mexico City to 19.7% (174 of 885; 17.2-22.2) in Montevideo. After adjustment for key risk factors, the prevalence of COPD in Mexico City remained significantly lower than that in other cities. These results suggest that COPD is a greater health problem in Latin America than previously realised. Altitude may explain part of the difference in prevalence. Given the high rates of tobacco use in the region, increasing public awareness of the burden of COPD is important.

B Varkey (2004)
Chronic obstructive pulmonary disease (COPD) is a major cause of morbidity and mortality throughout the world. This major public health threat is ranked twelfth as a worldwide burden of disease and is projected to rank fifth by the year 2020 as a cause of lost quantity and quality of life. The impact of this disease in women is significantly understudied but the evidence that does exist reveals potentially substantial gender differences in the susceptibility to, severity of, and response to management of COPD. The best known risk factor for the development of COPD is tobacco smoking. While smoking rates in women have largely stabilized in developed countries, the rates are continuing to climb in developing countries. While it is not clear whether women are more susceptible to the toxic effects of cigarette smoke than men, it is known that the incidence and prevalence of COPD will continue to climb as more women smoke. Other known risk factors for the development of COPD include air pollution, infections, occupational exposures, and genetic factors. Air pollution, particularly fine particulate indoor air pollution from biomass fuels disproportionately affects women. Infections such as human immunodeficiency virus (HIV) and tuberculosis (TB) disproportionately affect vulnerable populations such as poor women and occupational exposures to various dusts and toxins are often gender specific. Genetic factors are still being explored but there seems a preponderance of women who are affected by early-onset and non-smoking related COPD. Women with COPD also seem to be underdiagnosed by physicians and may have different responses to medical treatment, smoking cessation interventions, and pulmonary rehabilitation programs. Chronic obstructive pulmonary disease in women is an understudied subject but is gaining attention as a significant public health threat. In developed countries, efforts at preventing the initiation of tobacco smoking and targeting smoking cessation programs in women are needed. In developing countries, efforts to promote cleaner fuels, improved stoves, better home ventilation, reduce toxic dust and fume exposures, combat infectious diseases such as TB and HIV, and improve nutrition are all ways in which the lung health of women can be improved.