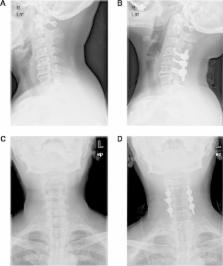 The purpose of the present study was to explore and analyze the long-term outcomes and factors that affect the prognosis of expansive open-door laminoplasty with lateral mass screw fusion in treatment of cervical spondylotic myelopathy (CSM).

We retrospectively reviewed 49 patients with multilevel CSM who had undergone expansive open-door laminoplasty with lateral mass screws fixation and fusion in our hospital between February 2008 and February 2012. The average follow-up period was 4.6 years. The clinical data of patients, including age, sex, operation records, pre- and postoperation Japanese Orthopedic Association (JOA) scores, cervical spine canal stenosis, and cervical curvature, were collected. Increased signal intensity (ISI) on T2-weighted magnetic resonance imaging and ossification of the posterior longitudinal ligament were also observed. Paired t-test was used to analyze the treatment effectiveness and recovery of neuronal function. The prognostic factors were analyzed with multivariable linear regression model.

Correlation between operative outcomes of cervical compression myelopathy and mri of the spinal cord.

Hirokazu Ishihara,  Hiroshi Nakamura,  Tomoatsu Kimura … (2003)
The long-term outcome (> 10 years) after cervical laminoplasty was assessed and the postoperative problems were clarified. One hundred thirty-three patients had laminoplasty between 1981 and 1989 for treatment of cervical myelopathy and 126 patients were available for the current study. The clinical results were evaluated using the Japanese Orthopaedic Association score. The radiologic findings were analyzed by postural anomalies and range of motion. The average preoperative score was 9.1 points, and the postoperative score improved to 13.7 points within a year. The Japanese Orthopaedic Association score and recovery rate were maintained at 13.4 points and 55.1% at the last followup. In 20 patients, the Japanese Orthopaedic Association score worsened during the followup. The causes of deterioration were axial spread of ossification of the posterior longitudinal ligament, other spinal lesions, cerebral infarction, and peripheral neuropathy. Postoperative cervical radiculopathy occurred in nine patients. Postoperative radiculopathy resolved in five patients, but remained in four patients. Kyphotic changes were observed in eight patients. The recovery rate in patients with kyphosis was poor. The postoperative range of motion decreased to 25.1% of preoperative range of motion. Sixty one percent of patients had a reduction of range of motion. Satisfactory results of cervical laminoplasty were maintained for more than 10 years after surgery; however, there were several postoperative problems, such as neurologic deterioration, postoperative radiculopathy, progression of kyphosis, and range of motion limitation.

The incidence of C5 palsy after multilevel cervical decompression procedures: a review of 750 consecutive cases.

D E Kang,  Ravi Ponnappan,  Jason C Eck … (2012)
Retrospective review of 750 consecutive multilevel cervical spine decompression surgeries performed by a single spine surgeon. To determine the incidence of C5 palsy in a large consecutive series of multilevel cervical spine decompression procedures. Palsy of the C5 nerve is a well-known potential complication of cervical spine surgery with reported rates ranging from 0% to 30%. The etiology remains uncertain but has been attributed to iatrogenic injury during surgery, tethering from shifting of the spinal cord, spinal cord ischemia, and reperfusion injury of the spinal cord. We included patients undergoing multilevel cervical corpectomy, corpectomy with posterior fusion, posterior laminectomy and fusion, and laminoplasty. Exclusion criteria included lack of follow-up data, spinal cord injury preventing preoperative or postoperative motor testing, or surgery not involving the C5 level. Incidence of C5 palsy was determined and compared to determine whether significant differences existed among the various procedures, patient age, sex, revision surgery, preoperative weakness, diabetes, smoking, number of levels decompressed, and history of previous upper extremity surgery. Of the 750 patients, 120 were eliminated on the basis of the exclusion criteria. The 630 patients included in the analysis consisted of 292 females and 338 males. The mean age was 58 years (range, 19-87). The incidence of C5 nerve palsy for the entire group was 42 of 630 (6.7%). The incidence was highest for the laminectomy and fusion group (9.5%), followed by the corpectomy with posterior fusion group (8.4%), the corpectomy group (5.1%), and finally the laminoplasty group (4.8%), although these differences did not reach statistical significance. There was a significantly higher incidence in males (8.6% vs. 4.5%, P = 0.05). Incidence of C5 nerve palsy after cervical spine decompression was 6.7%. This is consistent with previously published studies and represents the largest series of North American patients to date. There is no statistically significant difference in incidence of C5 palsy based on surgical procedure, although there was a trend toward higher rates with laminectomy and fusion.