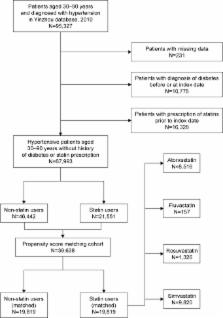 Reports have suggested that statin use is associated with an increased incidence of type 2 diabetes mellitus (T2DM). Guidelines suggested that statins should be prescribed in hypertensive patients for primary prevention. However, there were very few studies on the risk of T2DM associated with statin use among patients with hypertension in mainland People’s Republic of China.

To determine the association between statin use and new-onset diabetes mellitus among patients with hypertension in mainland People’s Republic of China.

We performed a retrospective cohort study of hypertensive patients using the Yinzhou regional health care database from January 1, 2010, to August 31, 2016. Patients aged 30–90 years old without T2DM were eligible for inclusion. We identified new statin initiators and nonusers by using prescription records of inpatients and outpatients. Multivariate Cox model and propensity score methods were used to adjust potential confounders, including age, sex, body mass index, comorbidities, lifestyle characteristics, and baseline antihypertensive drug use. The risk of incident T2DM among statin initiators compared to nonusers was estimated by the Cox proportional hazards model. Propensity scores for statin use were then developed using logistic regression, statin initiators were matched 1:1 with nonusers according to propensity scores with the nearest neighbor matching method within 0.2 caliper width, and Cox regression was again conducted.

Statin use and risk of diabetes mellitus in postmenopausal women in the Women's Health Initiative.

Raji Balasubramanian,  Jean Wactawski‐Wende,  Deidre M. Sepavich … (2012)
This study investigates whether the incidence of new-onset diabetes mellitus (DM) is associated with statin use among postmenopausal women participating in the Women's Health Initiative (WHI). The WHI recruited 161,808 postmenopausal women aged 50 to 79 years at 40 clinical centers across the United States from 1993 to 1998 with ongoing follow-up. The current analysis includes data through 2005. Statin use was captured at enrollment and year 3. Incident DM status was determined annually from enrollment. Cox proportional hazards models were used to estimate the risk of DM by statin use, with adjustments for propensity score and other potential confounding factors. Subgroup analyses by race/ethnicity, obesity status, and age group were conducted to uncover effect modification. This investigation included 153,840 women without DM and no missing data at baseline. At baseline, 7.04% reported taking statin medication. There were 10,242 incident cases of self-reported DM over 1,004,466 person-years of follow-up. Statin use at baseline was associated with an increased risk of DM (hazard ratio [HR], 1.71; 95% CI, 1.61-1.83). This association remained after adjusting for other potential confounders (multivariate-adjusted HR, 1.48; 95% CI, 1.38-1.59) and was observed for all types of statin medications. Subset analyses evaluating the association of self-reported DM with longitudinal measures of statin use in 125,575 women confirmed these findings. Statin medication use in postmenopausal women is associated with an increased risk for DM. This may be a medication class effect. Further study by statin type and dose may reveal varying risk levels for new-onset DM in this population.

Statin Therapy and Risk of Developing Type 2 Diabetes: A Meta-Analysis

Swapnil Rajpathak,  Dharam J. Kumbhani,  Jill Crandall … (2009)
OBJECTIVE Although statin therapy reduces cardiovascular risk, its relationship with the development of diabetes is controversial. The first study (West of Scotland Coronary Prevention Study [WOSCOPS]) that evaluated this association reported a small protective effect but used nonstandardized criteria for diabetes diagnosis. However, results from subsequent hypothesis-testing trials have been inconsistent. The aim of this meta-analysis is to evaluate the possible effect of statin therapy on incident diabetes. RESEARCH DESIGN AND METHODS A systematic literature search for randomized statin trials that reported data on diabetes through February 2009 was conducted using specific search terms. In addition to the hypothesis-generating data from WOSCOPS, hypothesis-testing data were available from the Heart Protection Study (HPS), the Long-Term Intervention with Pravastatin in Ischemic Disease (LIPID) Study, the Anglo-Scandinavian Cardiac Outcomes Trial (ASCOT), the Justification for the Use of Statins in Prevention: an Intervention Trial Evaluating Rosuvastatin (JUPITER), and the Controlled Rosuvastatin Multinational Study in Heart Failure (CORONA), together including 57,593 patients with mean follow-up of 3.9 years during which 2,082 incident diabetes cases accrued. Weighted averages were reported as risk ratios (RRs) with 95% CIs using a random-effects model. Statistical heterogeneity scores were assessed with the Q and I 2 statistic. RESULTS In the meta-analysis of the hypothesis-testing trials, we observed a small increase in diabetes risk (RR 1.13 [95% CI 1.03–1.23]) with no evidence of heterogeneity across trials. However, this estimate was attenuated and no longer significant when the hypothesis-generating trial WOSCOPS was included (1.06 [0.93–1.25]) and also resulted in significant heterogeneity (Q 11.8 [5 d.f.], P = 0.03, I 2 = 57.7%). CONCLUSIONS Although statin therapy greatly lowers vascular risk, including among those with and at risk for diabetes, the relationship of statin therapy to incident diabetes remains uncertain. Future statin trials should be designed to formally address this issue.