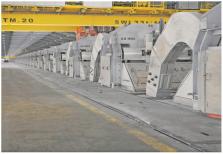 M Styner,  C Brechbühler,  G. Szckely … (2000)
This paper presents a new approach to the correction of intensity inhomogeneities in magnetic resonance imaging (MRI) that significantly improves intensity-based tissue segmentation. The distortion of the image brightness values by a low-frequency bias field impedes visual inspection and segmentation. The new correction method called parametric bias field correction (PABIC) is based on a simplified model of the imaging process, a parametric model of tissue class statistics, and a polynomial model of the inhomogeneity field. We assume that the image is composed of pixels assigned to a small number of categories with a priori known statistics. Further we assume that the image is corrupted by noise and a low-frequency inhomogeneity field. The estimation of the parametric bias field is formulated as a nonlinear energy minimization problem using an evolution strategy (ES). The resulting bias field is independent of the image region configurations and thus overcomes limitations of methods based on homomorphic filtering. Furthermore, PABIC can correct bias distortions much larger than the image contrast. Input parameters are the intensity statistics of the classes and the degree of the polynomial function. The polynomial approach combines bias correction with histogram adjustment, making it well suited for normalizing the intensity histogram of datasets from serial studies. We present simulations and a quantitative validation with phantom and test images. A large number of MR image data acquired with breast, surface, and head coils, both in two dimensions and three dimensions, have been processed and demonstrate the versatility and robustness of this new bias correction scheme.

Klaus Peter Kammerer,  Burkhard Hoppenstedt,  Rüdiger Pryss … (2019)
To build, run, and maintain reliable manufacturing machines, the condition of their components has to be continuously monitored. When following a fine-grained monitoring of these machines, challenges emerge pertaining to the (1) feeding procedure of large amounts of sensor data to downstream processing components and the (2) meaningful analysis of the produced data. Regarding the latter aspect, manifold purposes are addressed by practitioners and researchers. Two analyses of real-world datasets that were generated in production settings are discussed in this paper. More specifically, the analyses had the goals (1) to detect sensor data anomalies for further analyses of a pharma packaging scenario and (2) to predict unfavorable temperature values of a 3D printing machine environment. Based on the results of the analyses, it will be shown that a proper management of machines and their components in industrial manufacturing environments can be efficiently supported by the detection of anomalies. The latter shall help to support the technical evangelists of the production companies more properly.