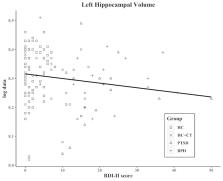 In this study, we examined limbic and total brain volumes in healthy women with and without a history of CT and in females with PTSD or BPD and a history of CT to see whether neuroanatomical changes are a function of psychopathology or CT.

In total, 128 women ( N = 70 healthy controls without CT, N = 25 healthy controls with CT, N = 14 individuals with PTSD, and N = 19 individuals with BPD) were recruited. A T1-weighted anatomical MRI was acquired from all participants for Freesurfer-based assessment of total brain, hippocampus, and amygdala volumes. Severity of CT was assessed with a clinical interview and the Childhood Trauma Questionnaire. Group differences in hippocampal and amygdala volumes (adjusted for total brain volume) and total brain volume (adjusted for height) were characterized by analysis of covariance.

Volume of the total brain, hippocampus, and amygdala did not differ between the four groups (p > .05). CT severity correlated negatively with total brain volume across groups ( r = −0.20; p = .029).

Torsten Klengel,  Divya Mehta,  Christoph Anacker … (2013)
Although the fact that genetic predisposition and environmental exposures interact to shape development and function of the human brain and, ultimately, the risk of psychiatric disorders has drawn wide interest, the corresponding molecular mechanisms have not yet been elucidated. We found that a functional polymorphism altering chromatin interaction between the transcription start site and long-range enhancers in the FK506 binding protein 5 (FKBP5) gene, an important regulator of the stress hormone system, increased the risk of developing stress-related psychiatric disorders in adulthood by allele-specific, childhood trauma-dependent DNA demethylation in functional glucocorticoid response elements of FKBP5. This demethylation was linked to increased stress-dependent gene transcription followed by a long-term dysregulation of the stress hormone system and a global effect on the function of immune cells and brain areas associated with stress regulation. This identification of molecular mechanisms of genotype-directed long-term environmental reactivity will be useful for designing more effective treatment strategies for stress-related disorders.

Marilyn Albert,  Evelina Busa,  Bruce R. Rosen … (2002)
We present a technique for automatically assigning a neuroanatomical label to each voxel in an MRI volume based on probabilistic information automatically estimated from a manually labeled training set. In contrast to existing segmentation procedures that only label a small number of tissue classes, the current method assigns one of 37 labels to each voxel, including left and right caudate, putamen, pallidum, thalamus, lateral ventricles, hippocampus, and amygdala. The classification technique employs a registration procedure that is robust to anatomical variability, including the ventricular enlargement typically associated with neurological diseases and aging. The technique is shown to be comparable in accuracy to manual labeling, and of sufficient sensitivity to robustly detect changes in the volume of noncortical structures that presage the onset of probable Alzheimer's disease.

The link between childhood trauma and depression: insights from HPA axis studies in humans.

Christine Heim,  D Newport,  Tanja M. Mletzko … (2008)
Childhood trauma is a potent risk factor for developing depression in adulthood, particularly in response to additional stress. We here summarize results from a series of clinical studies suggesting that childhood trauma in humans is associated with sensitization of the neuroendocrine stress response, glucocorticoid resistance, increased central corticotropin-releasing factor (CRF) activity, immune activation, and reduced hippocampal volume, closely paralleling several of the neuroendocrine features of depression. Neuroendocrine changes secondary to early-life stress likely reflect risk to develop depression in response to stress, potentially due to failure of a connected neural circuitry implicated in emotional, neuroendocrine and autonomic control to compensate in response to challenge. However, not all of depression is related to childhood trauma and our results suggest the existence of biologically distinguishable subtypes of depression as a function of childhood trauma that are also responsive to differential treatment. Other risk factors, such as female gender and genetic dispositions, interfere with components of the stress response and further increase vulnerability for depression. Similar associations apply to a spectrum of other psychiatric and medical disorders that frequently coincide with depression and are aggravated by stress. Taken together, this line of evidence demonstrates that psychoneuroendocrine research may ultimately promote optimized clinical care and help prevent the adverse outcomes of childhood trauma.