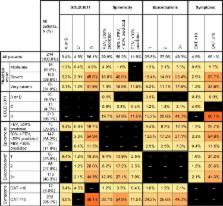 This study aimed to compare spirometry- and risk + symptom-based classification systems to physician-based severity assessment and find which system is most predictive of patient-reported health status, as measured by the St George’s Respiratory Questionnaire for COPD (chronic obstructive pulmonary disease; SGRQ-C).

Of 244 patients, 58.6% were severe and 34.8% very severe by physician report, 70% had FEV 1 ≤50% at their most recent visit, and 86% fell into quadrant D. Spirometry and physician report had 57.4% agreement, with physicians often indicating higher severity. Physician report and risk + symptom agreement was high (81.2% severe/very severe and D). Physician-reported severity, risk + symptoms, exacerbations in the previous year, and symptoms were significant SGRQ-C predictors, while spirometry was not.

Paul W Jones,  Margaret Tabberer,  Wen-Hung Chen (2011)
Background The COPD Assessment Test (CAT™) is a new short health status measure for routine use. New questionnaires require reference points so that users can understand the scores; descriptive scenarios are one way of doing this. A novel method of creating scenarios is described. Methods A Bland and Altman plot showed a consistent relationship between CAT scores and scores obtained with the St George's Respiratory Questionnaire for COPD (SGRQ-C) permitting a direct mapping process between CAT and SGRQ items. The severity associated with each CAT item was calculated using a probabilistic model and expressed in logits (log odds of a patient of given severity affirming that item 50% of the time). Severity estimates for SGRQ-C items in logits were also available, allowing direct comparisons with CAT items. CAT scores were categorised into Low, Medium, High and Very High Impact. SGRQ items of corresponding severity were used to create scenarios associated with each category. Results Each CAT category was associated with a scenario comprising 12 to 16 SGRQ-C items. A severity 'ladder' associating CAT scores with exemplar health status effects was also created. Items associated with 'Low' and 'Medium' Impact appeared to be subjectively quite severe in terms of their effect on daily life. Conclusions These scenarios provide users of the CAT with a good sense of the health impact associated with different scores. More generally they provide a surprising insight into the severity of the effects of COPD, even in patients with apparently mild-moderate health status impact.

Jan Degryse,  Jan Heyrman,  J Buffels … (2004)
To determine if spirometry is essential for the early detection of COPD in general practice, compared to the screening value of a short questionnaire. A prospective survey of the population aged 35 to 70 years visiting their general practitioner (GP) during a 12-week period, using a questionnaire on symptoms of obstructive lung disease (OLD). Spirometry was performed in all participants with positive answers and in a 10% random sample from the group without complaints. Twenty GPs were provided with a hand-held spirometer, and received training in performance and interpretation of lung function tests. All 35- to 70-year-old patients (n = 3,408) were screened for current use of bronchodilators. The subgroup receiving bronchodilators (n = 250, 7%) was assumed to have OLD, and was excluded. Airflow obstruction was defined according to the European Respiratory Society standards. The positive predictive power of the questionnaire was low (sensitivity, 58%; specificity, 78%; likelihood ratio, 2.6). One hundred twenty-six cases of formerly unknown OLD were detected in the group of patients with complaints, vs an extrapolated number of 90 in the group without complaints. Despite a negative predictive value of 95% for the questionnaire used, 42% of the newly diagnosed cases of OLD would not have been detected without spirometry. The use of a spirometer is mandatory if early stages of OLD are to be detected in general practice. Screening for airflow obstruction almost doubles the number of known patients with OLD.