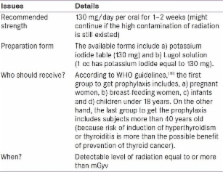 The recent nuclear disaster at Japan has raised global concerns about effects of radioactive leakage in the environment, associated hazards, and how they can be prevented. In this article, we have tried to explain about the guidelines laid down by World Health Organization for a potassium iodide prophylaxis following a nuclear disaster, and its mechanism of action in preventing thyroid cancer. Data was collected mainly from the studies carried out during the Chernobyl disaster of Russia in 1986 and the hazardous effects especially on the thyroid gland were studied. It was seen that radioactive iodine leakage from the nuclear plants mainly affected the thyroid gland, and especially children were at a higher risk at developing the cancers. Potassium Iodide prophylaxis can be administered in order to prevent an increase in the incidence of thyroid cancers in the population of an area affected by a nuclear disaster. However, one has to be cautious while giving it, as using it without indication has its own risks.

The Chernobyl Accident 20 Years On: An Assessment of the Health Consequences and the International Response

Keith Baverstock,  Dillwyn Williams (2006)
Background The Chernobyl accident in 1986 caused widespread radioactive contamination and enormous concern. Twenty years later, the World Health Organization and the International Atomic Energy Authority issued a generally reassuring statement about the consequences. Accurate assessment of the consequences is important to the current debate on nuclear power. Objectives Our objectives in this study were to evaluate the health impact of the Chernobyl accident, assess the international response to the accident, and consider how to improve responses to future accidents. Discussion So far, radiation to the thyroid from radioisotopes of iodine has caused several thousand cases of thyroid cancer but very few deaths; exposed children were most susceptible. The focus on thyroid cancer has diverted attention from possible nonthyroid effects, such as mini-satellite instability, which is potentially important. The international response to the accident was inadequate and uncoordinated, and has been unjustifiably reassuring. Accurate assessment of Chernobyl’s future health effects is not currently possible in the light of dose uncertainties, current debates over radiation actions, and the lessons from the late consequences of atomic bomb exposure. Conclusions Because of the uncertainties over the dose from and the consequences of the Chernobyl accident, it is essential that investigations of its effects should be broadened and supported for the long term. Because of the problems with the international response to Chernobyl, the United Nations should initiate an independent review of the actions and assignments of the agencies concerned, with recommendations for dealing with future international-scale accidents. These should involve independent scientists and ensure cooperation rather than rivalry.

A Yarilin,  V Arshinov,  N M Nadezhina … (1993)
T cell number, serum concentrations of thymic hormones and anti-epithelial autoantibodies were studied in people affected at Chernobyl NPP. Group 1 took part in the clearing-up operation and had no clinical manifestations of acute radiation sickness. Group 2 worked at the NPP during the accident; they survived acute radiation sickness (degree I-II, subgroup 2a; degree III-IV, subgroup 2b). The total doses of external radiation were 0.1-0.5 Gy in group 1, up to 4 Gy in subgroup 2a and up to 9 Gy in subgroup 2b. Total T cell number, serum thymic activity and alpha 1-thymosin concentration were decreased in all groups of affected persons. CD8+ cell number decreased only in group 1; CD4+ cell number in subgroup 2b. A decrease in thymic hormone level was most prominent in subgroup 2b. The titres of anti-epithelial antibodies were increased in all groups of affected persons independently of radiation dose. The titres were higher in patients with subnormal levels of alpha 1-thymosin. It has been proposed that radiation alters the function of thymic epithelial cells by direct action and/or through indirect mechanisms including participation of autoantibodies. The observed complex of alterations is similar to that in the normal process of immunological ageing.