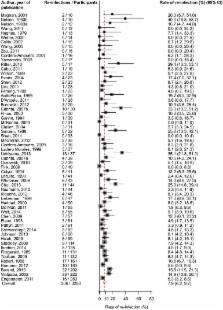 To compare the effectiveness of one- and two-stage revision strategies in treating prosthetic hip infection, using re-infection as an outcome.

Cohort studies (prospective or retrospective) conducted in generally unselected patients with prosthetic hip infection treated exclusively by one- or two-stage revision and with re-infection outcomes reported within two years of revision. No clinical trials were identified.

Data were extracted by two independent investigators and a consensus was reached with involvement of a third. Rates of re-infection from 38 one-stage studies (2,536 participants) and 60 two-stage studies (3,288 participants) were aggregated using random-effect models after arcsine transformation, and were grouped by study and population level characteristics.

In one-stage studies, the rate (95% confidence intervals) of re-infection was 8.2% (6.0–10.8). The corresponding re-infection rate after two-stage revision was 7.9% (6.2–9.7). Re-infection rates remained generally similar when grouped by several study and population level characteristics. There was no strong evidence of publication bias among contributing studies.

Evidence from aggregate published data suggest similar re-infection rates after one- or two-stage revision among unselected patients. More detailed analyses under a broader range of circumstances and exploration of other sources of heterogeneity will require collaborative pooling of individual participant data.

Explaining heterogeneity in meta-analysis: a comparison of methods.

Paul Sharp,  S. Thompson (1999)
Exploring the possible reasons for heterogeneity between studies is an important aspect of conducting a meta-analysis. This paper compares a number of methods which can be used to investigate whether a particular covariate, with a value defined for each study in the meta-analysis, explains any heterogeneity. The main example is from a meta-analysis of randomized trials of serum cholesterol reduction, in which the log-odds ratio for coronary events is related to the average extent of cholesterol reduction achieved in each trial. Different forms of weighted normal errors regression and random effects logistic regression are compared. These analyses quantify the extent to which heterogeneity is explained, as well as the effect of cholesterol reduction on the risk of coronary events. In a second example, the relationship between treatment effect estimates and their precision is examined, in order to assess the evidence for publication bias. We conclude that methods which allow for an additive component of residual heterogeneity should be used. In weighted regression, a restricted maximum likelihood estimator is appropriate, although a number of other estimators are also available. Methods which use the original form of the data explicitly, for example the binomial model for observed proportions rather than assuming normality of the log-odds ratios, are now computationally feasible. Although such methods are preferable in principle, they often give similar results in practice. Copyright 1999 John Wiley & Sons, Ltd.

¶ Membership of the INFORM Team is provided in the Acknowledgments.

This article presents independent research funded by the National Institute for Health Research (NIHR) under its Programme Grants for Applied Research program (RP-PG-1210-12005). The views expressed in this article are those of the authors and not necessarily those of the NHS, the NIHR, or the Department of Health. The funders had no role in study design, data collection and analysis, decision to publish, or preparation of the manuscript.