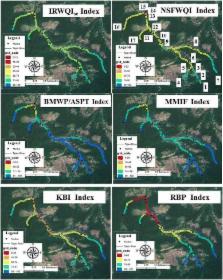 Nowadays, aquatic organisms are used as bio-indicators to assess ecological water quality in western regions, but have hardly been used in an Iranian context. We, therefore, evaluated the suitability of several indices to assess the water quality for an Iranian case study.

Measured data on biotic (fish and macroinvertebrates) and abiotic elements (28 physicochemical and habitat parameters), were used to calculate six indices for assessment of water quality and the impact of human activities in the Tajan river, Iran. GIS, uni- and multivariate statistics were used to assess the correlations between biological and environmental endpoints.

The fish index showed a strong relationship with long-term database of physicochemical parameters (12 years (94%)), whereas macroinvertebrates index is more correlated with short-term data (76%). Meanwhile, the biotic and abiotic elements in this study were also classified well by PCA. Pulp and wood plants and sand mining are indicated to have the most negative effects on the river ecosystem.

Fish Invasions in the World's River Systems: When Natural Processes Are Blurred by Human Activities

The potential for constructed wetlands for wastewater treatment and reuse in developing countries: a review