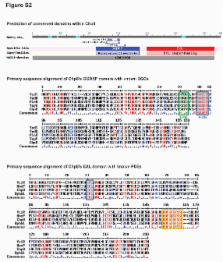 The bacterial plant pathogen Pseudomonas syringae causes disease in a wide range of plants. The associated decrease in crop yields results in economic losses and threatens global food security. Competition exists between the plant immune system and the pathogen, the basic principles of which can be applied to animal infection pathways. P. syringae uses a type III secretion system (T3SS) to deliver virulence factors into the plant that promote survival of the bacterium. The P. syringae T3SS is a product of the hypersensitive response and pathogenicity ( hrp) and hypersensitive response and conserved ( hrc) gene cluster, which is strictly controlled by the codependent enhancer-binding proteins HrpR and HrpS. Through a combination of bacterial gene regulation and phenotypic studies, plant infection assays, and plant hormone quantifications, we now report that Chp8 (i) is embedded in the Hrp regulon and expressed in response to plant signals and HrpRS, (ii) is a functional diguanylate cyclase, (iii) decreases the expression of the major pathogen-associated molecular pattern (PAMP) flagellin and increases extracellular polysaccharides (EPS), and (iv) impacts the salicylic acid/jasmonic acid hormonal immune response and disease progression. We propose that Chp8 expression dampens PAMP-triggered immunity during early plant infection.

The global demand for food is projected to rise by 50% by 2030 and, as such, represents one of the major challenges of the 21st century, requiring improved crop management. Diseases caused by plant pathogens decrease crop yields, result in significant economic losses, and threaten global food security. Gaining mechanistic insights into the events at the plant-pathogen interface and employing this knowledge to make crops more resilient is one important strategy for improving crop management. Plant-pathogen interactions are characterized by the sophisticated interplay between plant immunity elicited upon pathogen recognition and immune evasion by the pathogen. Here, we identify Chp8 as a contributor to the major effort of the plant pathogen Pseudomonas syringae pv. tomato DC3000 to evade immune responses of the plant.

Eiji Nambara,  Annie Marion-Poll (2004)
The level of abscisic acid (ABA) in any particular tissue in a plant is determined by the rate of biosynthesis and catabolism of the hormone. Therefore, identifying all the genes involved in the metabolism is essential for a complete understanding of how this hormone directs plant growth and development. To date, almost all the biosynthetic genes have been identified through the isolation of auxotrophic mutants. On the other hand, among several ABA catabolic pathways, current genomic approaches revealed that Arabidopsis CYP707A genes encode ABA 8'-hydroxylases, which catalyze the first committed step in the predominant ABA catabolic pathway. Identification of ABA metabolic genes has revealed that multiple metabolic steps are differentially regulated to fine-tune the ABA level at both transcriptional and post-transcriptional levels. Furthermore, recent ongoing studies have given new insights into the regulation and site of ABA metabolism in relation to its physiological roles.

Cyril Zipfel,  Georg Felix,  Silke Robatzek … (2004)
Plants and animals recognize microbial invaders by detecting pathogen-associated molecular patterns (PAMPs) such as flagellin. However, the importance of flagellin perception for disease resistance has, until now, not been demonstrated. Here we show that treatment of plants with flg22, a peptide representing the elicitor-active epitope of flagellin, induces the expression of numerous defence-related genes and triggers resistance to pathogenic bacteria in wild-type plants, but not in plants carrying mutations in the flagellin receptor gene FLS2. This induced resistance seems to be independent of salicylic acid, jasmonic acid and ethylene signalling. Wild-type and fls2 mutants both display enhanced resistance when treated with crude bacterial extracts, even devoid of elicitor-active flagellin, indicating the existence of functional perception systems for PAMPs other than flagellin. Although fls2 mutant plants are as susceptible as the wild type when bacteria are infiltrated into leaves, they are more susceptible to the pathogen Pseudomonas syringae pv. tomato DC3000 when it is sprayed on the leaf surface. Thus, flagellin perception restricts bacterial invasion, probably at an early step, and contributes to the plant's disease resistance.

Jorge E. Galán,  Hans Wolf-Watz (2006)
Bacteria that have sustained long-standing close associations with eukaryotic hosts have evolved specific adaptations to survive and replicate in this environment. Perhaps one of the most remarkable of those adaptations is the type III secretion system (T3SS)--a bacterial organelle that has specifically evolved to deliver bacterial proteins into eukaryotic cells. Although originally identified in a handful of pathogenic bacteria, T3SSs are encoded by a large number of bacterial species that are symbiotic or pathogenic for humans, other animals including insects or nematodes, and plants. The study of these systems is leading to unique insights into not only organelle assembly and protein secretion but also mechanisms of symbiosis and pathogenesis.

This article is a direct contribution from a member of the American Academy of Microbiology.

This is an open-access article distributed under the terms of the Creative Commons Attribution 3.0 Unported license.