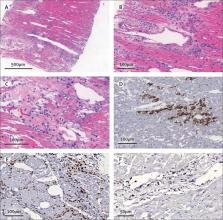 Marion Grimaud,  Julie Starck,  Michael Levy … (2020)
Background A recent increase in children admitted with hypotensive shock and fever in the context of the COVID-19 outbreak requires an urgent characterization and assessment of the involvement of SARS-CoV-2 infection. This is a case series performed at 4 academic tertiary care centers in Paris of all the children admitted to the pediatric intensive care unit (PICU) with shock, fever and suspected SARS-CoV-2 infection between April 15th and April 27th, 2020. Results 20 critically ill children admitted for shock had an acute myocarditis (left ventricular ejection fraction, 35% (25–55); troponin, 269 ng/mL (31–4607)), and arterial hypotension with mainly vasoplegic clinical presentation. The first symptoms before PICU admission were intense abdominal pain and fever for 6 days (1–10). All children had highly elevated C-reactive protein (> 94 mg/L) and procalcitonin (> 1.6 ng/mL) without microbial cause. At least one feature of Kawasaki disease was found in all children (fever, n = 20, skin rash, n = 10; conjunctivitis, n = 6; cheilitis, n = 5; adenitis, n = 2), but none had the typical form. SARS-CoV-2 PCR and serology were positive for 10 and 15 children, respectively. One child had both negative SARS-CoV-2 PCR and serology, but had a typical SARS-CoV-2 chest tomography scan. All children but one needed an inotropic/vasoactive drug support (epinephrine, n = 12; milrinone, n = 10; dobutamine, n = 6, norepinephrine, n = 4) and 8 were intubated. All children received intravenous immunoglobulin (2 g per kilogram) with adjuvant corticosteroids (n = 2), IL 1 receptor antagonist (n = 1) or a monoclonal antibody against IL-6 receptor (n = 1). All children survived and were afebrile with a full left ventricular function recovery at PICU discharge. Conclusions Acute myocarditis with intense systemic inflammation and atypical Kawasaki disease is an emerging severe pediatric disease following SARS-CoV-2 infection. Early recognition of this disease is needed and referral to an expert center is recommended. A delayed and inappropriate host immunological response is suspected. While underlying mechanisms remain unclear, further investigations are required to target an optimal treatment.

Aziz Bousfiha,  Leïla Jeddane,  Capucine Picard … (2020)
Since 2013, the International Union of Immunological Societies (IUIS) expert committee (EC) on Inborn Errors of Immunity (IEI) has published an updated phenotypic classification of IEI, which accompanies and complements their genotypic classification into ten tables. This phenotypic classification is user-friendly and serves as a resource for clinicians at the bedside. There are now 430 single-gene IEI underlying phenotypes as diverse as infection, malignancy, allergy, autoimmunity, and autoinflammation. We herein report the 2019 phenotypic classification, including the 65 new conditions. The diagnostic algorithms are based on clinical and laboratory phenotypes for each of the ten broad categories of IEI.

Emergence of Kawasaki disease related to SARS-CoV-2 infection in an epicentre of the French COVID-19 epidemic: a time-series analysis

Naim Ouldali,  Marie Pouletty,  Patricia Mariani … (2020)
Summary Background Kawasaki disease is an acute febrile systemic childhood vasculitis, which is suspected to be triggered by respiratory viral infections. We aimed to examine whether the ongoing COVID-19 epidemic, caused by severe acute respiratory syndrome coronavirus 2 (SARS-CoV-2), is associated with an increase in the incidence of Kawasaki disease. Methods We did a quasi-experimental interrupted time series analysis over the past 15 years in a tertiary paediatric centre in the Paris region, a French epicentre of the COVID-19 outbreak. The main outcome was the number of Kawasaki disease cases over time, estimated by quasi-Poisson regression. In the same centre, we recorded the number of hospital admissions from the emergency department (2005–2020) and the results of nasopharyngeal multiplex PCR to identify respiratory pathogens (2017–2020). These data were compared with daily hospital admissions due to confirmed COVID-19 in the same region, recorded by Public Health France. Findings Between Dec 1, 2005, and May 20, 2020, we included 230 patients with Kawasaki disease. The median number of Kawasaki disease hospitalisations estimated by the quasi-Poisson model was 1·2 per month (IQR 1·1–1·3). In April, 2020, we identified a rapid increase of Kawasaki disease that was related to SARS-CoV-2 (six cases per month; 497% increase [95% CI 72–1082]; p=0·0011), starting 2 weeks after the peak of the COVID-19 epidemic. SARS-CoV-2 was the only virus circulating intensely during this period, and was found in eight (80%) of ten patients with Kawasaki disease since April 15 (SARS-CoV-2-positive PCR or serology). A second peak of hospital admissions due to Kawasaki disease was observed in December, 2009 (six cases per month; 365% increase ([31–719]; p=0.0053), concomitant with the influenza A H1N1 pandemic. Interpretation Our study further suggests that viral respiratory infections, including SAR-CoV-2, could be triggers for Kawasaki disease and indicates the potential timing of an increase in incidence of the disease in COVID-19 epidemics. Health-care providers should be prepared to manage an influx of patients with severe Kawasaki disease, particularly in countries where the peak of COVID-19 has recently been reached. Funding French National Research Agency.