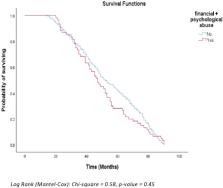 To determine the longitudinal impact of elder financial and psychological abuse on risk of death among older Malaysians.

7-year prospective cohort study. Baseline data were collected in late 2013 and respondents were followed up in June 2020.

Mortality data were provided by the Malaysian National Registration Department and linked to respondents’ national identification numbers. Kaplan-Meier curves and Cox regression were used to examine victims’ survival periods and the impact of abuse on risk of death.

Overall, 450 respondents (23.4%) died after 7 years. Among financial and psychological abuse victims, death percentage was 25.8% compared with 23.3% among those who did not experience these types of abuse. Kaplan-Meier curves showed shorter survival among abuse victims, but Cox regression found no significant impact of financial and psychological abuse on mortality risk (HR 1.05, 95% CI 0.78 to 1.41). Among all the variables studied, only cognitive impairment led to higher mortality risk (HR 1.32, 95% CI 1.03 to 1.69).

Our findings contradict prior empirical studies that supported the link between elder abuse and neglect (EAN) and mortality, even though we focused on two abuse subtypes. Results in this study are more in line with the recently emerging evidence that showed no association between EAN and mortality.

How stress influences the immune response.

The short form of the Geriatric Depression Scale: a comparison with the 30-item form.

W J Burke, W Roccaforte, S P Wengel (2015)
The Geriatric Depression Scale (GDS) exists in both short and long forms. The original 30-item form of the GDS has been shown to be an effective screening test for depression in a variety of settings. However, its utility in patients with dementia of the Alzheimer type (DAT) is questionable. The short, 15-item version of the GDS was developed primarily for brevity and, in particular, for use in populations such as the medically ill or those with dementia, where the longer form might be burdensome. How well this short form works in these populations, however, is largely undetermined. In this paper, the sensitivity and specificity of the 15- and 30-item GDS are compared in a group of patients who were either cognitively intact or had mild DAT. The findings suggest that the short version of the GDS, like its longer predecessor, is an effective screening tool in the cognitively intact. However, in a population of subjects with mild DAT, it does not appear to retain its validity.

Edna Reiche, Sandra Nunes, Helena Morimoto (2004)
The links between the psychological and physiological features of cancer risk and progression have been studied through psychoneuroimmunology. The persistent activation of the hypothalamic-pituitary-adrenal (HPA) axis in the chronic stress response and in depression probably impairs the immune response and contributes to the development and progression of some types of cancer. Here, we overview the evidence that various cellular and molecular immunological factors are compromised in chronic stress and depression and discuss the clinical implications of these factors in the initiation and progression of cancer. The consecutive stages of the multistep immune reactions are either inhibited or enhanced as a result of previous or parallel stress experiences, depending on the type and intensity of the stressor and on the animal species, strain, sex, or age. In general, both stressors and depression are associated with the decreased cytotoxic T-cell and natural-killer-cell activities that affect processes such as immune surveillance of tumours, and with the events that modulate development and accumulation of somatic mutations and genomic instability. A better understanding of the bidirectional communication between the neuroendocrine and immune systems could contribute to new clinical and treatment strategies.