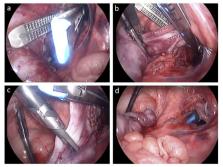 As many meta-analyses comparing pediatric minimally invasive to open surgery can be found in the literature, the aim of this review is to summarize the current state of minimally invasive pediatric surgery and specifically focus on the trends and developments which we expect in the upcoming years. Print and electronic databases were systematically searched for specific keywords, and cross-link searches with references found in the literature were added. Full-text articles were obtained, and eligibility criteria were applied independently. Pediatric minimally invasive surgery is a wide field, ranging from minimally invasive fetal surgery over microlaparoscopy in newborns to robotic surgery in adolescents. New techniques and devices, like natural orifice transluminal endoscopic surgery (NOTES), single-incision and endoscopic surgery, as well as the artificial uterus as a backup for surgery in preterm fetuses, all contribute to the development of less invasive procedures for children. In spite of all promising technical developments which will definitely change the way pediatric surgeons will perform minimally invasive procedures in the upcoming years, one must bear in mind that only hard data of prospective randomized controlled and double-blind trials can validate whether these techniques and devices really improve the surgical outcome of our patients.

K. Semm (1983)
These newly developed endoscopic methods in gynaecology for haemostasis during surgical pelviscopy (Endocoagulation Roeder-loop ligation, endoligature, endo-suture with intra- and extracorporeal knotting) make it possible to carry out appendectomy by endoscopy for any of the following indications: Postoperative adhesion of the appendix especially in "sterility" patients, elongated appendix extending into the small pelvis, endometriosis of the appendix, subacute and chronic appendicitis. The instrument-set employed in this method permits the performance of all the usual classical operative steps (purse-string suture, and Z-suture acc. to McBurney and Sprengel). The point for resection has to be sterilized over 20-30 sec. at 212 degrees F using the crocodile forceps (endocoagulation procedure) before division and extraction of the appendix is effected.