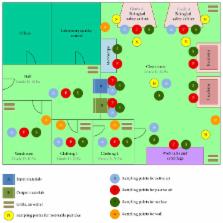 Mesenchymal stem cells (MSCs) are one of the main stem cells that have been used for advanced therapies and regenerative medicine. To carry out the translational clinical application of MSCs, their manufacturing and administration in human must be controlled; therefore they should be considered as medicine: stem cell-based medicinal products (SCMPs). The development of MSCs as SCMPs represents complicated therapeutics due to their extreme complex nature and rigorous regulatory oversights. The manufacturing process of MSCs needs to be addressed in clean environments in compliance with requirements of Good Manufacturing Practice (GMP). Facilities should maintain these GMP conditions according to international and national medicinal regulatory frameworks that introduce a number of specifications in order to produce MSCs as safe SCMPs. One of these important and complex requirements is the environmental monitoring. Although a number of environmental requirements are clearly defined, some others are provided as recommendations. In this review we aim to outline the current issues with regard to international guidelines which impact environmental monitoring in cleanrooms and clean areas for the manufacturing of MSCs.

Fernando Cobo,  Glyn Stacey,  Charles R. Hunt … (2005)
The transplant of cells of human origin is an increasingly complex sector of medicine which entails great opportunities for the treatment of a range of diseases. Stem cell banks should assure the quality, traceability and safety of cultures for transplantation and must implement an effective programme to prevent contamination of the final product. In donors, the presence of infectious micro-organisms, like human immunodeficiency virus, hepatitis B virus, hepatitis C virus and human T cell lymphotrophic virus, should be evaluated in addition to the possibility of other new infectious agents (e.g. transmissible spongiform encephalopathies and severe acute respiratory syndrome). The introduction of the nucleic acid amplification can avoid the window period of these viral infections. Contamination from the laboratory environment can be achieved by routine screening for bacteria, fungi, yeast and mycoplasma by European pharmacopoeia tests. Fastidious micro-organisms, and an adventitious or endogenous virus, is a well-known fact that will also have to be considered for processes involving in vitro culture of stem cells. It is also a standard part of current good practice in stem cell banks to carry out routine environmental microbiological monitoring of the cleanrooms where the cell cultures and their products are prepared. The risk of viral contamination from products of animal origin, like bovine serum and mouse fibroblasts as a “feeder layer” for the development of embryonic cell lines, should also be considered. Stem cell lines should be tested for prion particles and a virus of animal origin that assure an acceptable quality.

P Solomon,  Constantinos Sioutas (2008)
The U.S. Environmental Protection Agency (EPA) established the Particulate Matter (PM) Supersites Program to provide key stakeholders (government and private sector) with significantly improved information needed to develop effective and efficient strategies for reducing PM on urban and regional scales. All Supersites projects developed and evaluated methods and instruments, and significant advances have been made and applied within these programs to yield new insights to our understanding of PM accumulation in air as well as improved source-receptor relationships. The tested methods include a variety of continuous and semicontinuous instruments typically with a time resolution of an hour or less. These methods often overcome many of the limitations associated with measuring atmospheric PM mass concentrations by daily filter-based methods (e.g., potential positive or negative sampling artifacts). Semicontinuous coarse and ultrafine mass measurement methods also were developed and evaluated. Other semicontinuous monitors tested measured the major components of PM such as nitrate, sulfate, ammonium, organic and elemental carbon, trace elements, and water content of the aerosol as well as methods for other physical properties of PM, such as number concentration, size distribution, and particle density. Particle mass spectrometers, although unlikely to be used in national routine monitoring networks in the foreseeable future because of their complex technical requirements and cost, are mentioned here because of the wealth of new information they provide on the size-resolved chemical composition of atmospheric particles on a near continuous basis. Particle mass spectrometers likely represent the greatest advancement in PM measurement technology during the last decade. The improvements in time resolution achieved by the reported semicontinuous methods have proven to be especially useful in characterizing ambient PM, and are becoming essential in allowing scientists to investigate sources of particulate pollution and to probe into the dynamics and mechanisms of aerosol formation in the atmosphere.

Noella A. Dietz,  D Gastineau,  D Padley (2007)
The common conception of a drug is that of a chemical with defined medicinal effect. However, cells used as drugs remain critical to patient care. Cell therapy's origins began with the realization that complex tissues such as blood can retain function when transplanted to the patient. More complex transplantation followed, culminating with the understanding that transplantation of some tissues such as bone marrow may act medicinally. Administration of cells with an intended therapeutic effect is a hallmark of cellular therapy. While cells have been used as drugs for decades, testing a specific therapeutic effect of cells has begun clinical testing relatively recently. Lessons learned during the establishment of blood banking (including the importance of quality control, process control, sterility, and product tracking) are key components in the assurance of the safety and potency of cell therapy preparations. As more academic medical centers and private companies move toward exploiting the full potential of cells as drugs, needs arise for the development of the infrastructure necessary to support these investigations. Careful consideration of the design of the structure used to manufacture is important in terms of the significant capital outlay involved and the facility's role in achieving regulatory compliance. This development perspective describes the regulatory environment surrounding the infrastructure support for cell therapy and practical aspects for design consideration with particular focus on those activities associated with early clinical trials.