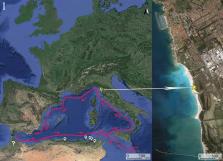 Belarima violacea (Lucas) is an uncommon species of the Galerucini tribe ( Coleoptera , Chrysomelidae , Galerucinae ) distributed in Algeria, Morocco and Tunisia, and recorded here for the first time for the European fauna. One male and one female were found, not far from each other, wandering on the sand among the vegetation of the shifting dunes of the Tuscan coast (Rosignano Solvay, Spiagge Bianche). Some hypotheses are proposed to explain the presence of B. violacea on the Italian coast. Morphological descriptions of external habitus, aedeagus and spematheca, the latter here described for the first time, are also provided, accompanied by micro-photographs.

How many genera and species of Galerucinae s. str. do we know? Updated statistics ( Coleoptera , Chrysomelidae )

Rui-E Nie,  Jan Bezděk,  Xing-Ke Yang (2017)
Abstract Galerucinae s. str. is a rich group of leaf beetles. A new, up-to date checklist of Galerucinae genera in the world is provided, including the number of valid species of each genus. Genera and species were counted in literature published before the end of 2016. In summary, 7145 species (7132 recent, 13 fossils) and 192 subspecies from 543 genera (542 recent, 1 fossil) were quantified in Galerucinae s. str. In comparison with the previous catalogue of worldwide Galerucinae (Wilcox 1971–1973), an additional 91 valid genera, 1341 valid species (1337 recent, 4 fossils) and 38 subspecies have been published; 43 genera were synonymized, four genera were transferred into Alticini , two subgenera were elevated to genus rank, and one genus was downgraded to subgenus rank. The updated list of references to taxonomic publications on Galerucinae s. str. from the period 1971–2016 is provided.

The circulation pattern in the Mediterranean Sea: issues for modeller consideration