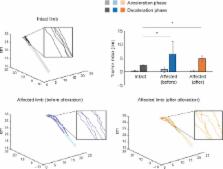 Disturbance of goal-directed motor control may cause or exacerbate pathological pain in patients with complex regional pain syndrome (CRPS). We conducted a single-case study about motor control involved in reaching with a patient with CRPS in an upper limb.

The results showed that the tremor of the affected hand was greater than that of the intact hand during the deceleration phase, both before and after pain alleviation. Reaching trajectories of the intact hand smoothly traced curves convexed toward the intact side, while those of the affected hand represented unnaturally rectilinear functions associated with the loss of smooth movements. Further, these unnatural trajectories partially recovered after pain alleviation.

Jane Grafton,  M Desmurget (2000)
Delays in sensorimotor loops have led to the proposal that reaching movements are primarily under pre-programmed control and that sensory feedback loops exert an influence only at the very end of a trajectory. The present review challenges this view. Although behavioral data suggest that a motor plan is assembled prior to the onset of movement, more recent studies have indicated that this initial plan does not unfold unaltered, but is updated continuously by internal feedback loops. These loops rely on a forward model that integrates the sensory inflow and motor outflow to evaluate the consequence of the motor commands sent to a limb, such as the arm. In such a model, the probable position and velocity of an effector can be estimated with negligible delays and even predicted in advance, thus making feedback strategies possible for fast reaching movements. The parietal lobe and cerebellum appear to play a crucial role in this process. The ability of the motor system to estimate the future state of the limb might be an evolutionary substrate for mental operations that require an estimate of sequelae in the immediate future.

Ryuichiro Suzuki,  M. Kawato,  Y Uno (1988)
In this paper, we study trajectory planning and control in voluntary, human arm movements. When a hand is moved to a target, the central nervous system must select one specific trajectory among an infinite number of possible trajectories that lead to the target position. First, we discuss what criterion is adopted for trajectory determination. Several researchers measured the hand trajectories of skilled movements and found common invariant features. For example, when moving the hand between a pair of targets, subjects tended to generate roughly straight hand paths with bell-shaped speed profiles. On the basis of these observations and dynamic optimization theory, we propose a mathematical model which accounts for formation of hand trajectories. This model is formulated by defining an objective function, a measure of performance for any possible movement: square of the rate of change of torque integrated over the entire movement. That is, the objective function CT is defined as follows: (formula; see text) We overcome this difficult by developing an iterative scheme, with which the optimal trajectory and the associated motor command are simultaneously computed. To evaluate our model, human hand trajectories were experimentally measured under various behavioral situations. These results supported the idea that the human hand trajectory is planned and controlled in accordance with the minimum torque-change criterion.

Motor adaptation as a process of reoptimization.

Reza Shadmehr,  Tushar Rane,  Opher Donchin … (2008)
Adaptation is sometimes viewed as a process in which the nervous system learns to predict and cancel effects of a novel environment, returning movements to near baseline (unperturbed) conditions. An alternate view is that cancellation is not the goal of adaptation. Rather, the goal is to maximize performance in that environment. If performance criteria are well defined, theory allows one to predict the reoptimized trajectory. For example, if velocity-dependent forces perturb the hand perpendicular to the direction of a reaching movement, the best reach plan is not a straight line but a curved path that appears to overcompensate for the forces. If this environment is stochastic (changing from trial to trial), the reoptimized plan should take into account this uncertainty, removing the overcompensation. If the stochastic environment is zero-mean, peak velocities should increase to allow for more time to approach the target. Finally, if one is reaching through a via-point, the optimum plan in a zero-mean deterministic environment is a smooth movement but in a zero-mean stochastic environment is a segmented movement. We observed all of these tendencies in how people adapt to novel environments. Therefore, motor control in a novel environment is not a process of perturbation cancellation. Rather, the process resembles reoptimization: through practice in the novel environment, we learn internal models that predict sensory consequences of motor commands. Through reward-based optimization, we use the internal model to search for a better movement plan to minimize implicit motor costs and maximize rewards.