An ERP study on L2 syntax processing: When do learners fail? 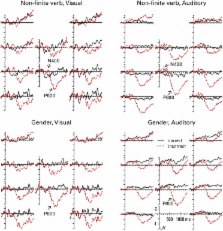 Event-related brain potentials (ERPs) can reveal online processing differences between native speakers and second language (L2) learners during language comprehension. Using the P600 as a measure of native-likeness, we investigated processing of grammatical gender agreement in highly proficient immersed Romance L2 learners of Dutch. We demonstrate that these late learners consistently fail to show native-like sensitivity to gender violations. This appears to be due to a combination of differences from the gender marking in their L1 and the relatively opaque Dutch gender system. We find that L2 use predicts the effect magnitude of non-finite verb violations, a relatively regular and transparent construction, but not that of gender agreement violations. There were no effects of age of acquisition, length of residence, proficiency or offline gender knowledge. Additionally, a within-subject comparison of stimulus modalities (written vs. auditory) shows that immersed learners may show some of the effects only in the auditory modality; in non-finite verb violations, an early native-like N400 was only present for auditory stimuli. However, modality failed to influence the response to gender. Taken together, the results confirm the persistent problems of Romance learners of Dutch with online gender processing and show that they cannot be overcome by reducing task demands related to the modality of stimulus presentation.