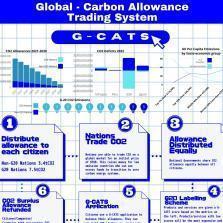 Simon Whalley is a forty-four-year-old husband and father to an eleven-year-old son. He is originally from Wales but has spent the past twenty years in Asia where he has bought and sold Vespas, worked in the Vietnamese shipping industry, and taught English at every level from kindergarten to university in Vietnam, Taiwan and Japan. He has a masters degree in teaching English to Students of Other Languages (TESOL) and currently teaches English at an International Baccalaureate (IB) School on an island in the Seto Sea, Japan. Here, with his wife and son, he looks after a former mandarin farm which is being turned into an organic food forest. He was a co-founder of Extinction Rebellion Japan, the website foodfacts.jp, a contributing author to Commondreams.org, and the upcoming Carbon Almanac.

In this paper, an alternative economic system to neoliberalism is introduced. Our current system of endless growth has pushed our climate and biospheres to almost complete collapse. It has also caused record levels of inequality, both domestically and internationally and those least responsible for the damage are already suffering. This paper analyses the carbon trading mechanisms that have been introduced in an attempt to encourage renewable energy growth, and then proposes a solution that will allow us to remain within our carbon budget to stop warming at 1.5 °C , distribute wealth more evenly and encourage a circular economy with less consumption and waste. The Global Carbon Allowance Trading System (G-CATS) works by allocating a strict carbon budget to citizens and then allowing them to trade in a carbon market with the price of carbon increasing as the budget is depleted. This allows those with money to purchase carbon from those who wish to sell in order to increase their wealth. Systemic change is urgently needed and a system that aims to satisfy those on the political left and right is described in this paper.

Data availability: The data that support the findings of this study are available from https://1drv.ms/x/s!At88mIb7GZqenzlGgi4FUKBw-LR-?e=j2eLxG but restrictions apply to the availability of these data, which were used under license for the current study, and so are not publicly available. Data are however available from the authors upon reasonable request and with permission of https://1drv.ms/x/s!At88mIb7GZqenzlGgi4FUKBw-LR-?e=j2eLxG.
ScienceOpen disciplines: Earth & Environmental sciences
Keywords: climate change, biodiversity loss, carbon allowance, carbon trading, income inequality, ecological economics