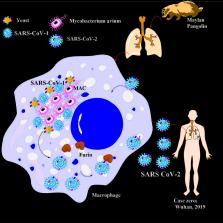 Discovery of the origin of SARS-CoV-2 become an urgent international need due to the current health and economic implications. Recently, pangolins were reported to have a diminished immunity and vulnerable to several infections. By the end of 2019; recent studies reported the pangolins infection with SARS like virus that showed a 99% genetic homology with SARS-CoV-2. In 2020; a genetic mutation was reported in pangolins that increases their vulnerability to infection with flagellated bacteria such as Mycobacterium species. Moreover, the introduced food formula containing yeast at several zoos, considered as a source of opportunistic Saccharomyces infection in such immunocompromised pangolins.

SARS-CoV-2 was naturally developed in an immunocompromised pangolin through microbial interaction that resulted in a hybrid microorganism containing viral RNA encapsulated within a glycan shield (Spike glycoprotein) manipulated by both Saccharomyces cerevisiae and Mycobacterium avium.

The proposed origin of the novel virus; SARS-CoV-2, explained the abnormal clinical findings such as disseminated infection, blood clotting, hyperpigmentation in some cases and Kawasaki like syndrome in kids. Lactose intolerance is also suggested as a new genetic risk factor that increases the vulnerability to infection with SARS-CoV-2. Moreover, the likelihood biofilm formation by SARS-CoV-2 is discussed. Furthermore, this hypothesis discussed the potential evolution of MERS through microbial interaction between Mycobacterium tuberculosis and SARS-CoV-1 virus.

Trials using triple therapy treatment strategy consisting of Remdesivir, Aithromycin and fluorocytosine as well as a yeast-based vaccine are suggested.