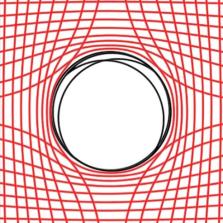 Abstract— To describe gravity in the most precise way and to be able to add it to the Standard Model, furthermore consider it as a force instead of geometry of space-time. The existence of the force-lines is well defined as the field with resistance creating the mass of the particles and gravitational field. The gravitational force is divided into attractive force and compressive force. The report claims that when a particle moves in the field of the force-lines faces resistance against the trajectory of the particle and this supposedly slowing force is the mass of the particle. Therefore, the equation comes m=kv2, where resistance coefficient multiplied to velocity in square. It means that photons which have 0 coefficient resistance have 0 mass m=0v2.However this report states that, photons also have resistance, therefore in this paper solution provided even if it’s extremely difficult to measure it. The field of the force-lines explains the true reason of gravity and the formation of mass. In some cases, properties are as defined by Higgs mechanism mfc2=ξf·φ0. The geometry of deformed force-lines defined as a force according to Hooke's law of deformation F=kx. “Field tells particle how to give mass, particle tells field how to give stress,” (S.Fatkhullaev).

Data availability: All data generated or analysed during this study are included in this published article (and its supplementary information files).
ScienceOpen disciplines: Astronomy & Astrophysics,Physics
Keywords: Time,Resistance ,Deformation ,Mass ,Gravitation