How does the Facebook Algorithm rank the contents according to the interaction buttons? 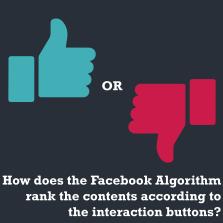 Objective: This research aimed at understanding how social media contents are ranked by the Facebook Algorithm according to interaction buttons. Thecorrelations between Facebook users' interactions and the organic reach of the given content canhelp to gain this aim.

Methods: We included 1025 non-paid, Facebook posts (N=1025). We collected thefollowing data in the post level. “Organic reach” is the number of people who saw the given non-paid content. The organicreach consisted of “fanreach” and “non-fan reach” according to previous “pagelike” activity. Theinvestigated interaction data was thefollowing: “Facebook reactions” (e.g., “like”); “shares”; “comments”; “clicks”; and “negative Facebook interactions” (e.g.,posthides).

Results: A significant negative correlation was found between organic reach and “like” reaction. We observed the strongest significant positive correlations of organic reach with “comments”, “haha” and “love” reactions. Furthermore, fanreach correlated positively with “comments”, “haha” and “love” reactions, while non-fan reach correlated positively with “shares” and “clicks”.

Conclusions: Some interactions on a post level can have higher priority in content ranking: “comments”, “haha”, “love”, and “sad” reactions. This study has shown that “like” reactions and “shares” can have a lower priority in content ranking. Our results suggest that a further categorization to fan-specific interactions (“haha” and “love”reactions, “comments”) and non-fan-specific interactions (“shares” and “clicks”) is needed. Finally, „shares” can generate more non-fans, however, “shares” can result in fewer fans. Thisexploratory research offers animportant insight into the Facebook content ranking for public health professionals who design Facebook-based interventions.